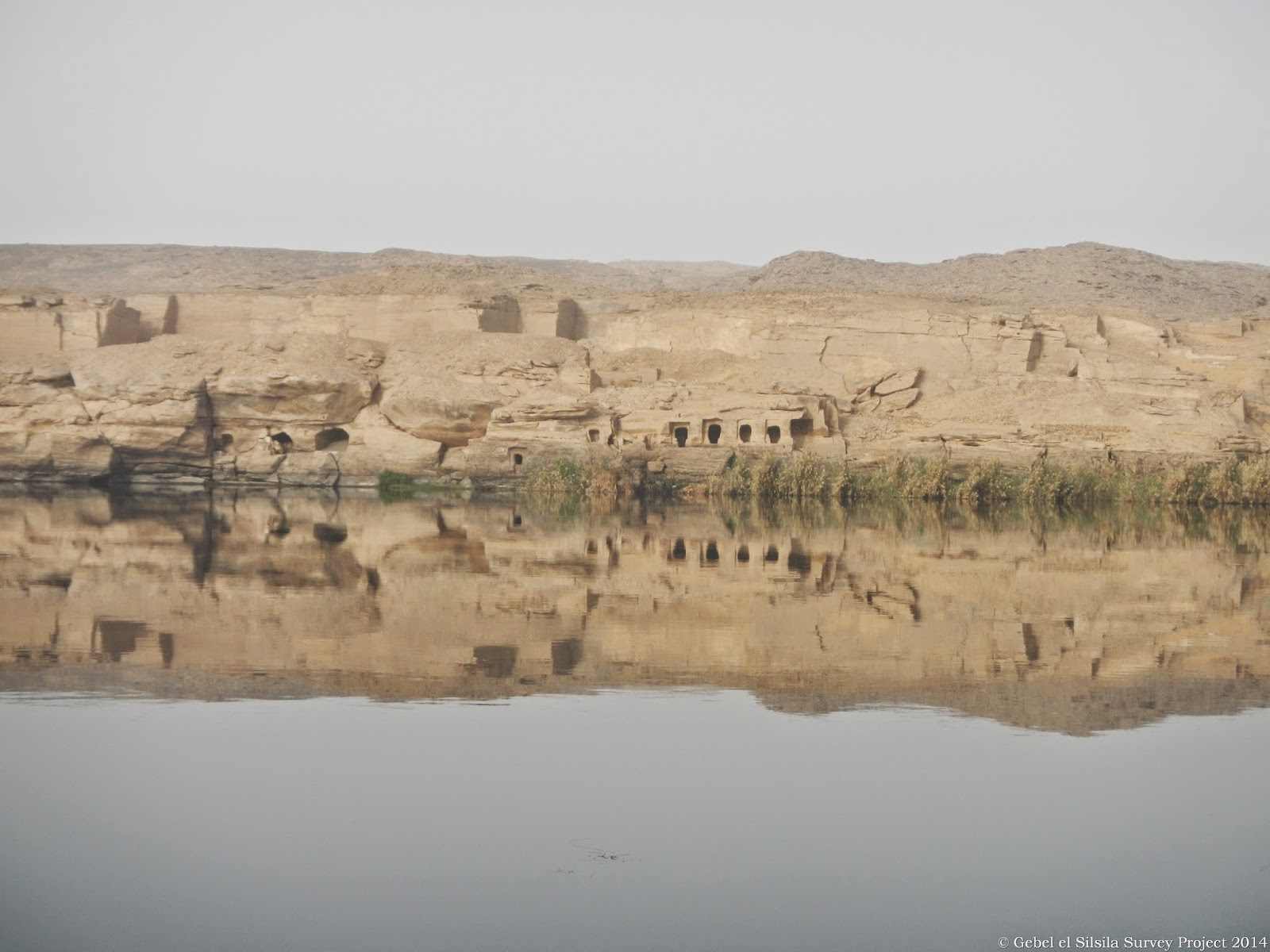 Oh dear, how does one begin to summarize 2 months, almost 9 weeks, of survey work? This first half of the 2014 season’s fieldwork has brought an incredible amount of new material, knowledge and understanding of the site in general, and chronologically span over 10 000 years of history. Epigraphy, topography, ceramic analysis, geological (surface) analysis, lithic studies, rock art recording, ‘contemporary’ epigraphic documentation (early travellers, etc.), quarry marks, team marks, extraction techniques, transportation routes; these (along with many more) are all topics that have been incorporated into the larger umbrella of our comprehensive archaeological study of Gebel el Silsila this season.


We have reached a greater understanding as to the chronological development of the site, from its earliest visitors in the form of nomadic hunter-gather groups that temporary found shelter and hunting ground along Silsila’s shores and wadis, to the various quarrying expeditions that were sent out by this and that pharaoh for the building of  one or another sanctuary. Epigraphic, ceramic and archaeological material comes together and help us understand in greater detail the smaller differences of techniques used on site – this may not sound very interesting or important, but each one of these details aid us in pinpointing Silsila’s function and importance during antiquity.

In addition to the purely scientific work, we have enjoyed a peaceful and successful season filled with excitement and adventure! We have been visited by various friends and colleagues, individually and groups; each one of which have reminded us of how blessed we are to work in such a magical ancient site as Madam Silsila.

So, how can we then summarize this spring season? Well, let us divide it into weeks and take you on a visual journey (like so often before).

Week 1:
During the first week we conducted a general visual overview of the site, walking through the landscape and reminding ourselves of the diversity of archaeological material presented. It feels good to start each season with a couple of days’ inspection in order to estimate current state of preservation, to see the material in new light, with new experience and with the stored knowledge and understanding from previous seasons. The light changes incredibly much from season to season, month to month, morning to night, so a revisit now and again to already recorded locations can be very fruitful. It is also a nice introduction for our new inspector (s), to get a quick and summarized insight into the site. This week we had the great pleasure of welcoming Dr. Sarah K. Doherty to the site, and efficient and driven as she is she jumped straight into the task of recording the pottery in our Main Quarry. Scott A. Roberts visited the site this week and provided the team with some professional photographs in preparation for a nice coffee table publication (!). The team was furthermore joined by three inspectors in training from Kom Ombo, and received during the season field experience necessary for their education.


Week 2:
This week the team divided into a ceramic study group and a rock art documentation group. As Sarah continued working her way through the pottery of the Main Quarry she generously took the time to teach our visiting inspector students the various ins and outs of ceramic analysis. Meanwhile the rock art survey continued on the west bank, including a more comprehensive photographic documentation, production of acetate copies and hand drawn images, measurements, marking of GPS coordinates into the system, etc. The surface in and around the various rock art sites was studied, and in some cases revealed lithic material that may bring a better understanding in terms of chronology. The lithic work shop (surface scatter) that was discovered during our 2013 season was studied in more detail, and other than the vast amount of debetage (waste material/’left overs’), we were happy to record various cores, triangular geometrics and scrapers made of quartz, flint, volcanic stone and the odd silicified sandstone –used as tools or for tool making.   During our second week we were all taken by the beauty captured in a series of fossilized leaves and branches dating some 75 million (!) years back. The word of the day was ‘wow’ as we all painted an inner picture of what Silsila must have appeared as all these millions of years ago. Humbleness for sure!

Week 3:
The rock art survey continued on both sides of the Nile and the ceramic analysis moved from East to West to take a closer look at the various scattered layers on and around Pottery Hill. The aim was to begin the long process of setting up a stylistic database for the site, something that has never been done before. Those of you who have worked with pottery before know very well how long this process is and it goes without saying that Sarah’s job this season was only a beginning, but hey, one has to start somewhere!? Despite one or two curses of Roman pottery our honorable ceramic specialist seemed to have come to terms with the somewhat later material than the Old Kingdom material she had grown so fond of previously.

During this week the Gebel el Silsila Survey Project team was honored to participate in the UNESCO organized conference ‘the southern gate of Egypt’ in Aswan where we presented the latest research from site.

Weeks 4-5:
Prof. James Harrell joined the team during week 4 and we spent some quality time studying and discussing the various extraction techniques and geological features of the site. The plan is for Jim to return to site and begin a larger geological study in 2015. As always, it is a true pleasure and delight to have him present!

As we said our farewell to our Irish team member the focus turned towards the south where two rock inscription sites were documented in more detail. As reported previously we were pleased to find more evidence of Middle Kingdom activity in the area, represented in epigraphic material as well as in quarrying techniques. During a day with a heavy, but beautiful thunderstorm we recorded some 50 textual and pictorial inscriptions in this area with representations ranging from Predynastic pictographs to Roman game boards!

Week 7:
There was no fieldwork carried out during what should have been week 6 since we left Egypt for the UK to participate in the CRE XV conference in London. No rest for the wicked though, as we returned to Silsila the day after our return to Egypt, and we were joined by visiting Egyptologist Dr. Philippe Martinez. Philippe will join the team officially as a team member for the coming season and will be responsible for the recording of foremost hieroglyphic material. As reported in our last blog post, this week brought with it some proper daredevils as we had a 15 m scaffolding system erected in the northern-most part of Silsila East. Forget about western health and safety measures, this piece brought us an opportunity, not to mention experience and adventure, of a lifetime as we climbed the external ladder to record the stele of Amenhotep IV. At the same time, five Predynastic rock art panels were recorded and two Epipalaeolithic clusters of depictions were added to the forever growing list of Prehistoric material at Silsila. Then one shall not forget to mention the excitement (?!) of entering the bat-colonized subterranean quarry gallery that revealed one or another piece of interesting information. Dressed in chicken-yellow rubber clothes from top to toe, an internal sauna was to be expected, but hey, who said archaeology is an easy task?! 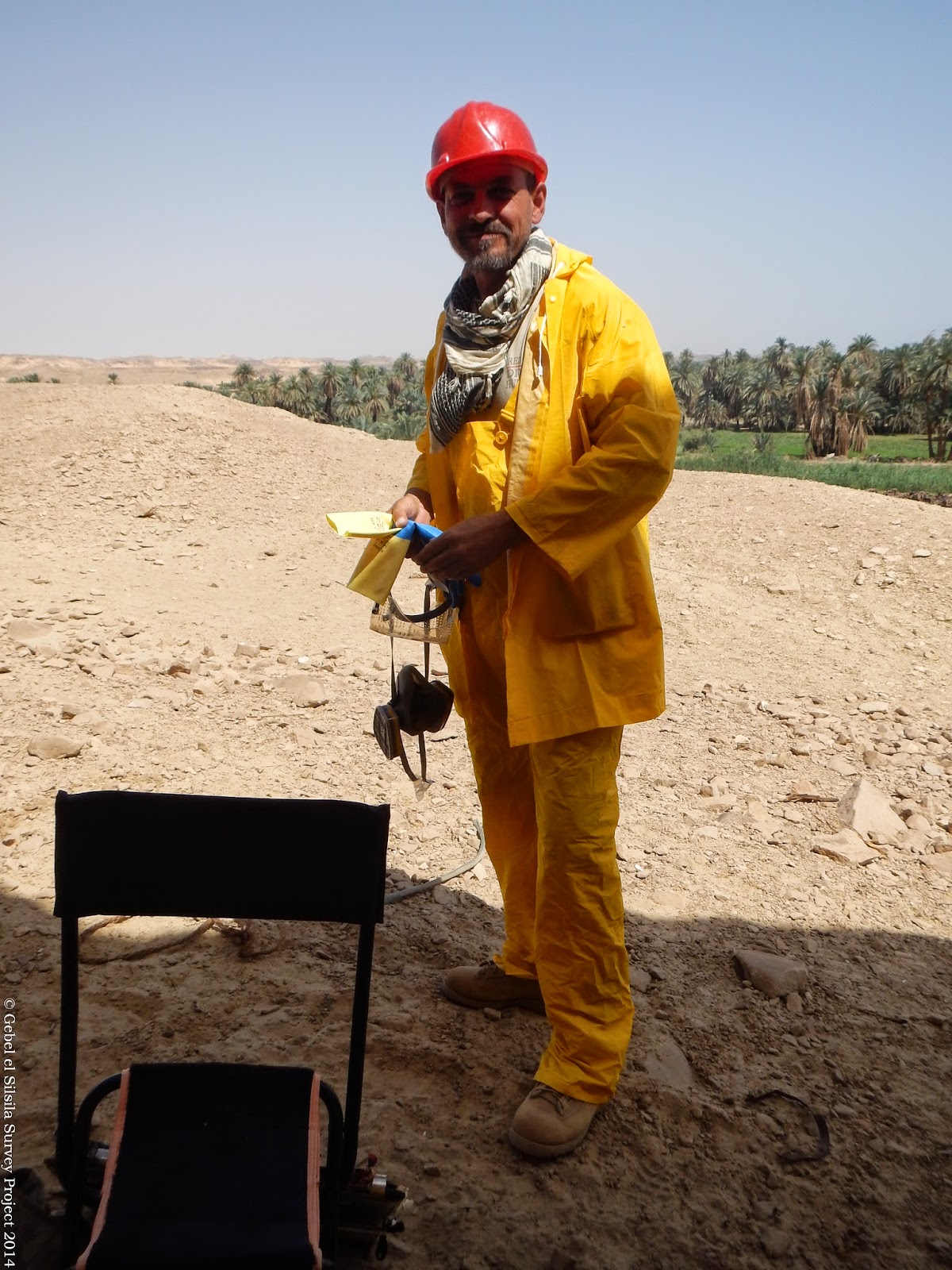 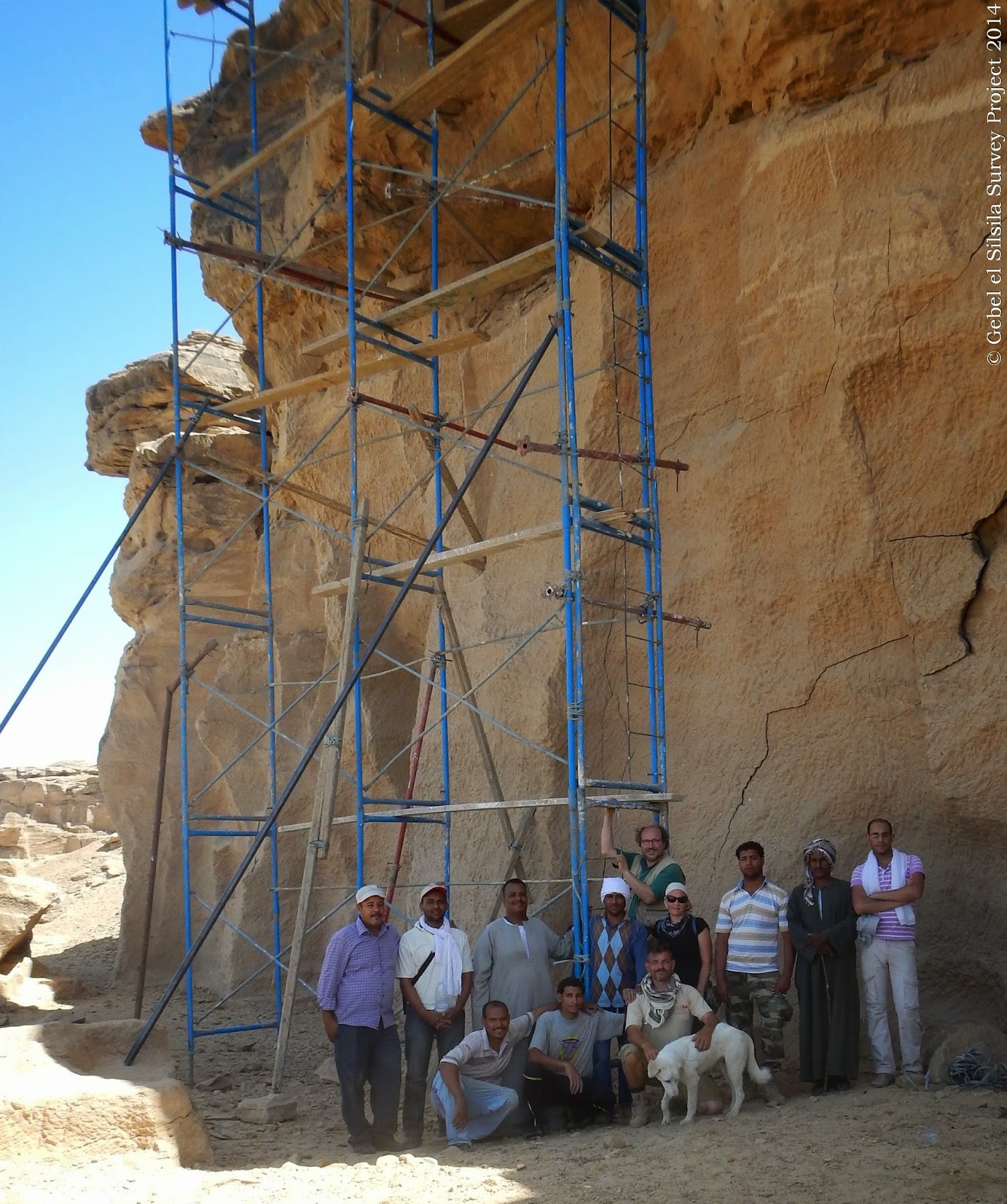 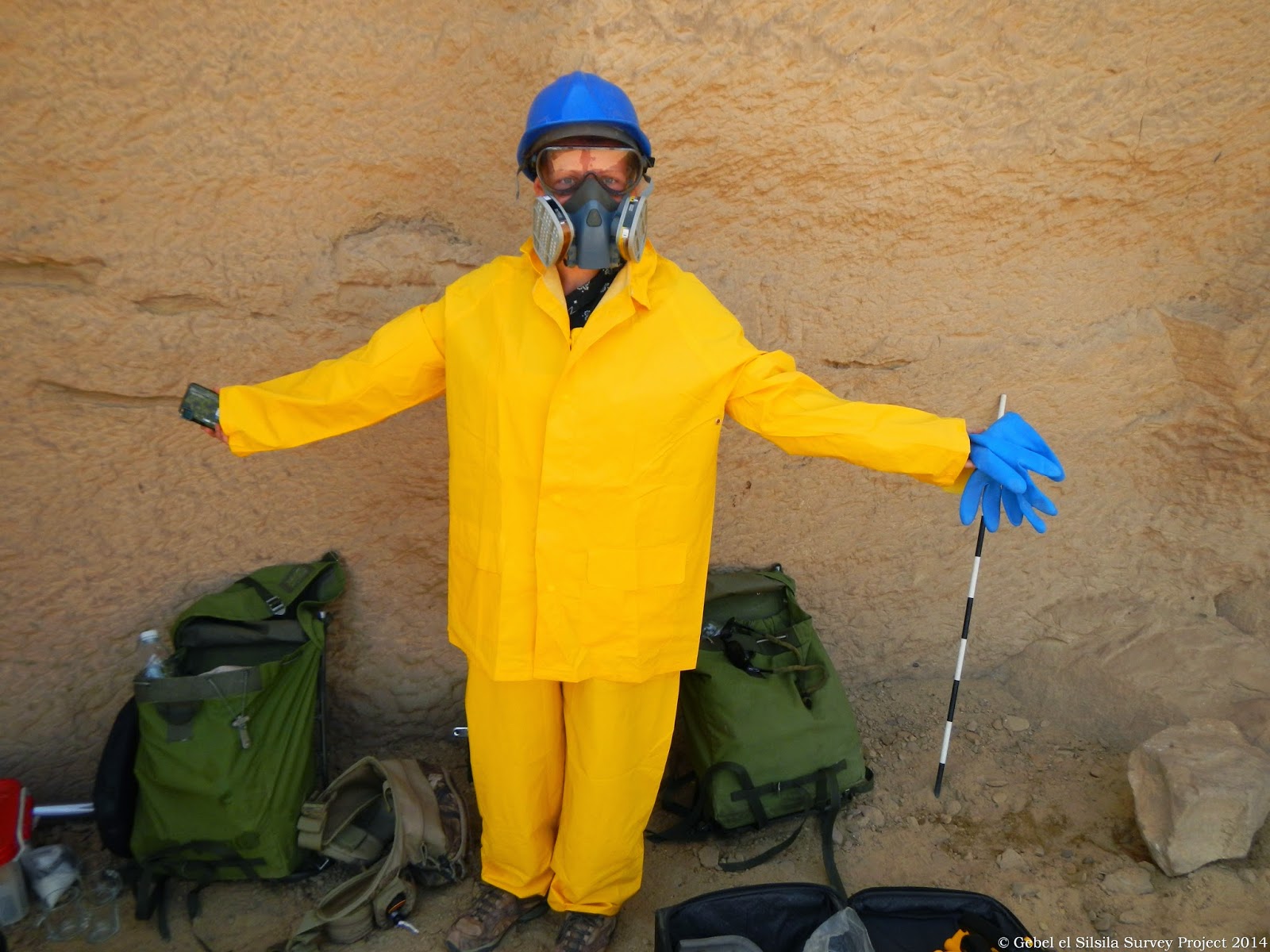 Weeks 8-9:
During our last week and a half we spent some quality time recording the epigraphic material in the Main Quarry of the West Bank, which also resulted in the production of a preliminary plan drawing of the quarry’s 50+ quarry faces. As this gigantic ‘hole’ in the mountain was created during various chronological phases it came as no surprise to discover texts and images ranging from the New Kingdom throughout to the Roman Period. Quarry marks, proper identity marks, labels of the quarry, names of individuals, and pictorial graffiti in various forms were all presented before our eyes.

Our last couple of days on site was spent recording the area commonly known as the ‘harbor’ at the West Bank, and it was during these days that we had the great pleasure of welcoming Mr. Francois Tonic and his tour group who defied the heat and visited the site one morning. We like to express our gratefulness for their support of our work and look forward to future visits!


Then it was time to pack up, collecting one’s belongings from the floating dig house of two months, try to write up and summarize a report of what had been done and what results had been achieved, and try to return to a more normal office life where the first task would be to deal with the thousands and yet thousands of images that had been produced during the season.   As so often before, this season has brought us more questions, thankfully also many answers, but we count ourselves fortunate to be able to now gather our thoughts, review the material and prepare for the next season of work to come. Maybe we will manage to put another little blog post in here before the autumn season takes off, and either way, we hope to have you with us virtually along this exciting journey of surveying Madam Silsila!

Thank you for all your support and encouragement this season, for your comments and for all the new contacts that we have made during this journey. In the not too far future we will present our new, proper website for you and with it the ‘Friends of Silsila’, which will enable various exciting features to the project!

We owe our deepest gratitude to the members of the Permanent Committee for giving us permission to work at Silsila. Our gratefulness is directed also to the inspectorates of Kom Ombo, especially Ahmed Sayed and Mohamed Ngar, and Director Abd el Moniem Said, and equally to the General Directors of Aswan Mr. Fathy Abuzied, and to all the inspectors assigned to our project.

Posted by gebelelsilsilaepigraphicsurveyproject at 8:28 PM No comments: