A week has passed since we left London after a fruitful and interesting time at CRE XV – thank you again to the organizers for doing such a great job, to EES, Petrie Museum and its Friends, and to all the wonderful friends and colleagues that made the event so great!

We returned to Silsila the day after our arrival back in Egypt and welcomed back to the site one of Silsila’s major devotees – Dr. Philip Martinez. We also welcomed to the team our two new inspectors, Mustafa and Sayed! The last week of work has included some daredevil moments as we had erected a monumental scaffolding system to reach the famous stela of Amenhotep IV on the East Bank. Without a proper ladder, safety measures were … well, let us say that we are all grateful for having survived the climbs up and down. 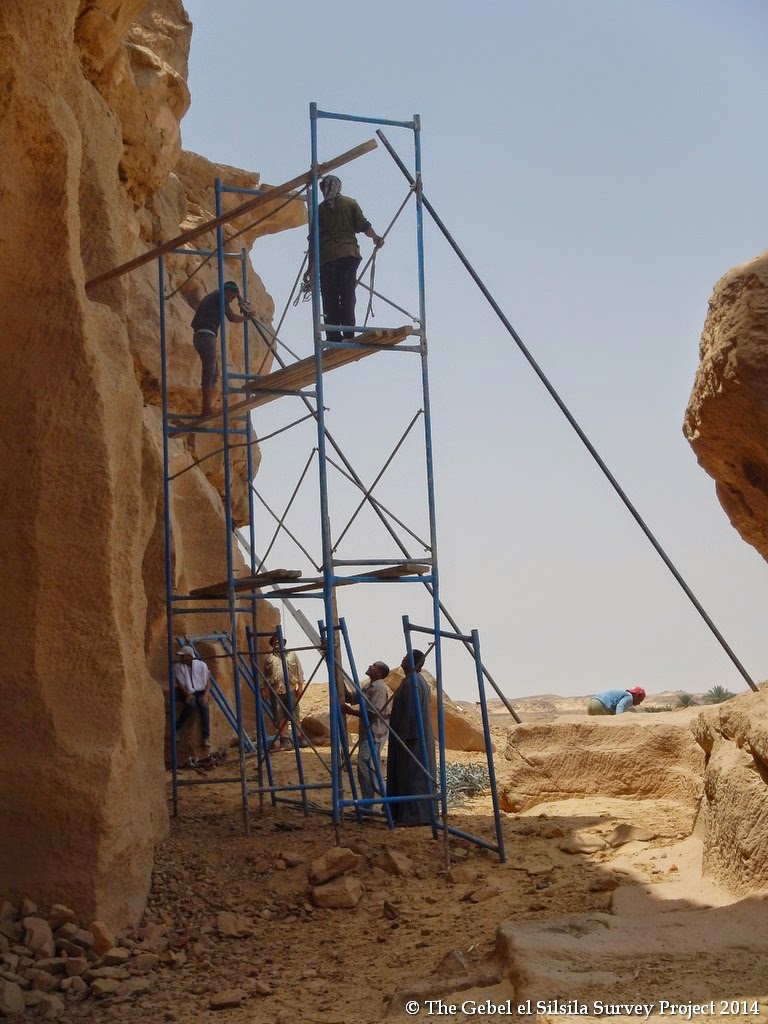 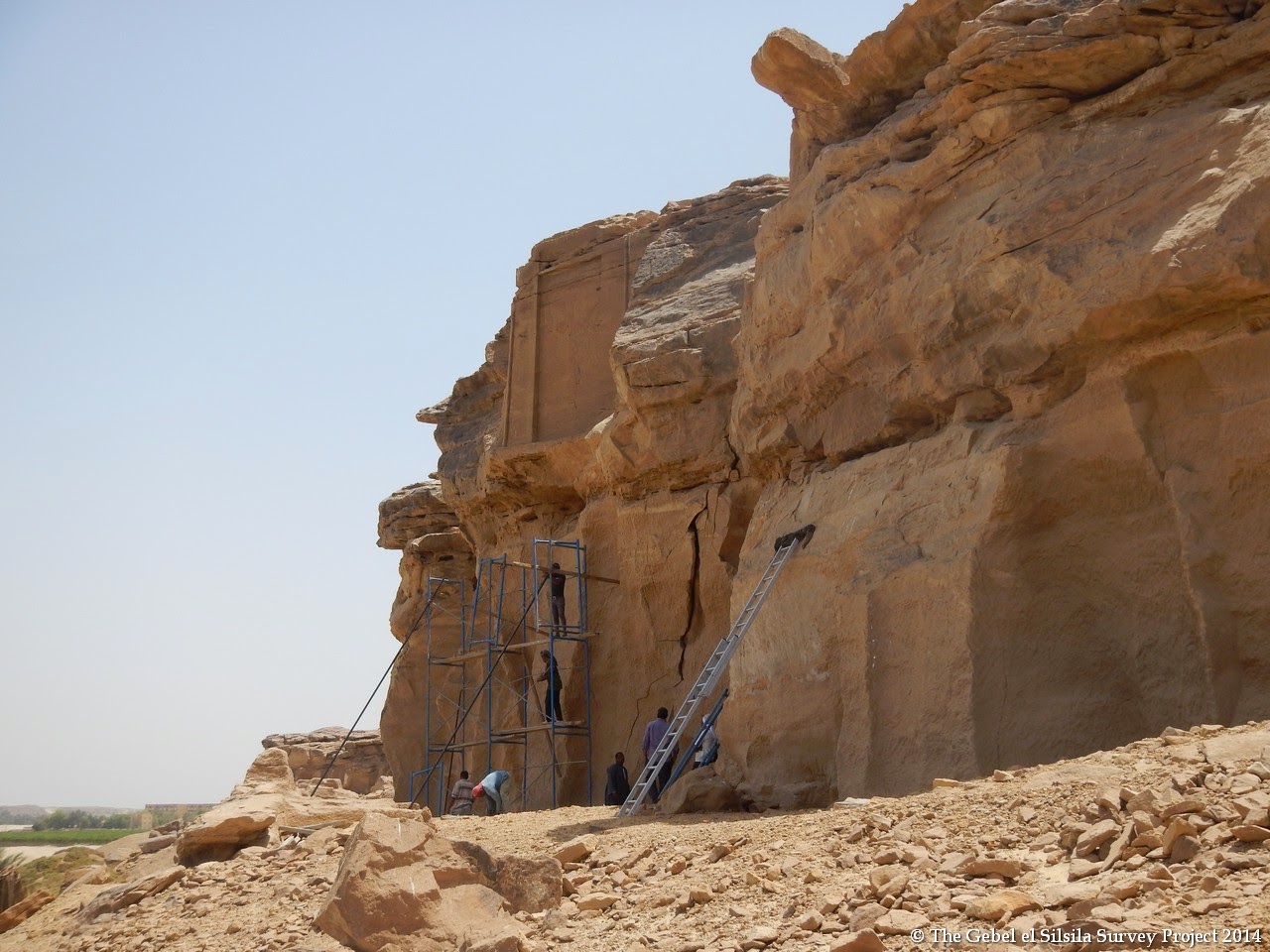 Also, while being in this beautiful northern part of the site, it was natural to record in detail the gorgeous Predynastic rock art panels that are located nearby. Giraffes, hunter scenes, boats and other motifs that have captured the essence of our Predynastic ancestors’ everyday life, all came to life through the work of a good camera combined with acetate drawings!

Another daredevil moment was experienced when John and I (Maria) finally suited up for the occasion of entering the not so famous bat-filled subterranean gallery on the East Bank. Several underground galleries (quarries) are preserved, some better than others, but this particular one has restrained most scholars from entering due to its enormous population of fruit-bats and smaller (regular) bats – and the smell that comes with such a populous, not to mention the possible risk of catching rabies. Well, indeed we dressed up for the occasion, not only to get the job done, but also in the colour of Easter as our suits were shiny chicken yellow.

Fully suited and booted, and with respiratory aid and construction workers’ hats, we entered the cave of bats with great enthusiasm. In the extreme heat wave that we have experiences recently, you can all imagine what it was like to be trapped inside a rubber suit, needless to say a shower was welcome afterwards…Indeed it was worth our effort as a hieratic text emerged from the quarry walls, and which after some digital reconstruction (due to its poor state of preservation) may reveal the identity of responsible Pharaoh or vizier. Other than the text, well we learnt more in regards to the extraction methodology and got some more clues as to chronological issues that keep us busy in this respect. 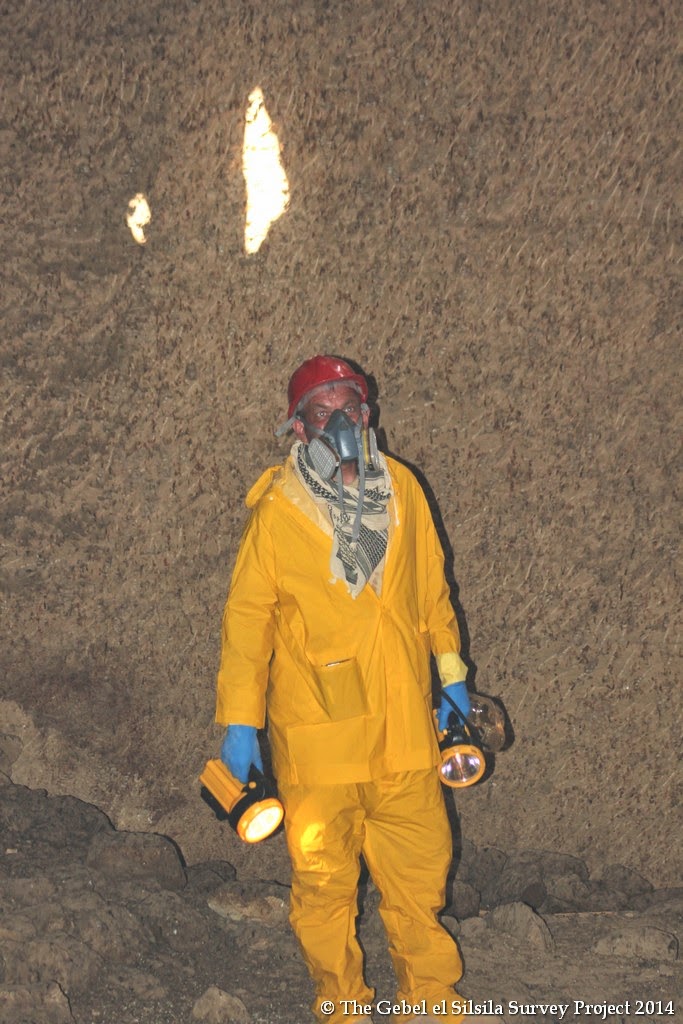 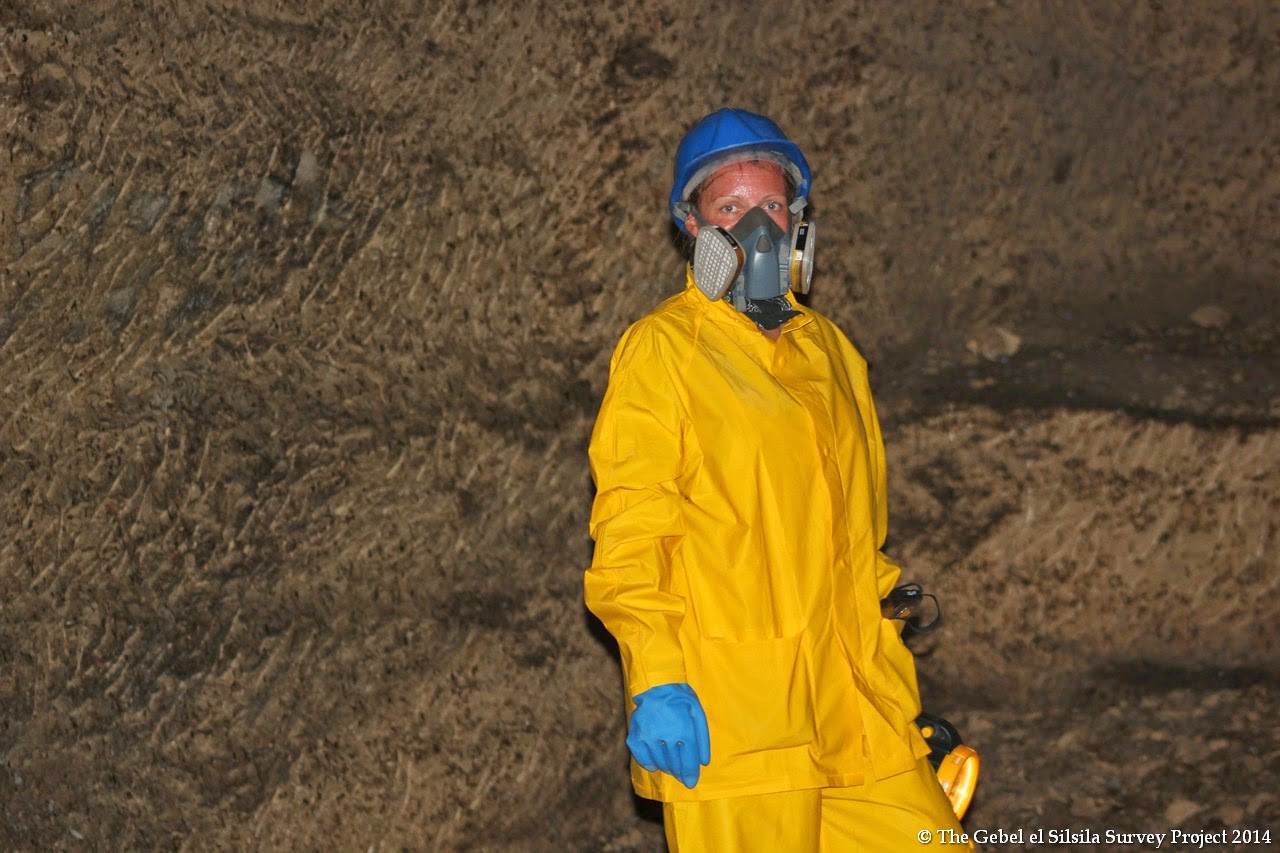 The last week has brought extreme temperatures to all Upper Egypt – naturally included Silsila – and with its strong wind and sense of being stuck inside a hot air dryer it has been somewhat difficult to concentrate (or to use the long-lens camera…). However, work must go on, and while the scaffolding came down on the East John and I moved into the Main Quarry of the West Bank in order to continue the study of quarry marks, extraction techniques, topographical features, and so on. While baking in the natural sauna (I know, I should be used to such as Scandinavian), some nice surprises revealed themselves to us, and it is with great excitement that we look forward to continue in this part in the following days.

Our last week of survey work at Silsila for this spring season are intended to be spent in the footsteps of the Prehistorics combined with a general topographic overview of the northern sections of the site, and with continuous recording, translations and understanding of dynastic textual graffiti. But for now – well today – the team takes a break from work in the field as Egypt and the Egyptian people celebrates Sham el Nassim.

The Gebel el Silsila Survey Project team is honoured and delighted to express our deepest gratefulness to Jan & Bep Koek at the Mehen Study centre for ancient Egypt for their generous donation and support to the project! Thank you!

Posted by gebelelsilsilaepigraphicsurveyproject at 12:08 PM