With our 10th successful season completed, there are so many things we would love to share with you. For this, there will be a series of updates within the coming months, ranging from field reports to 3D imagery, etc. For today´s update, we would like to highlight the most recent news as released by the Ministry of Antiquities this month, here in an extended (popular scientific) report from the field.

However, firstly, and on behalf of the entire Silsila Team, we would like to thank our Egyptian colleague, Mr Ashraf Mohamed, who after having dedicated twelve years as an inspector at Gebel el-Silsila, has left us for el-Kab. We wish him all the luck and success in his new job! Thank you for the many wonderful memories, laughter and shared excitement on site, as well as for your true love for Gebel el-Silsila! Thank you Ashraf!

We would also like to congratulate our dear colleagues:

During their ongoing excavations, the Swedish-Egyptian archaeological mission (Lund University), headed by Dr. Maria Nilsson and John Ward in cooperation with the inspectorate of Kom Ombo and Aswan directed by Mr. Abdel Menum (Aswan) and Mr. Ahmed Sayed (Kom Ombo), discovered several intact child burials as well as crypts and chambers for adults in the 18th Dynasty Necropolis at Gebel el-Silsila in the Aswan region.

The best-preserved child burials include: 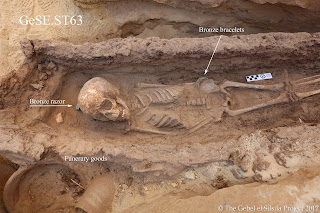 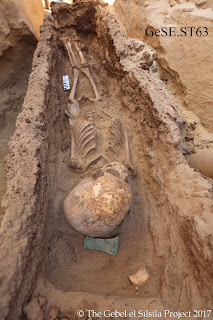 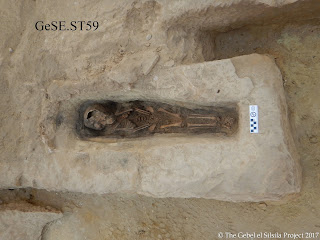 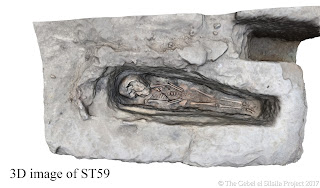 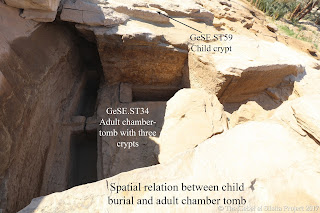 3)         Inhumation of a child (ST64), c. 5-8 years, oriented with head in the east, unknown facial direction due to later disturbance of the head, possibly caused when burying the child of ST63. Body wrapped in linen and laid on reed matting. Burial goods included three scarabs, one of which contained the royal name of Thutmosis II (Aa-Kheper-n-Ra), and a single ceramic vessel not in its original location. 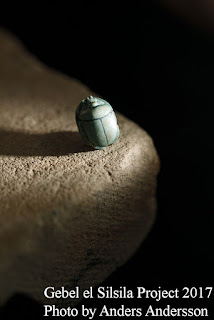 4)         Inhumation of child (ST69), c-5-8 years, oriented with head to the north, facing east. Buried without any obvious care in quarried area, and covered with quarry spoil. No immediate relation with surrounding tombs. Some indications of sickness. Further studies required. 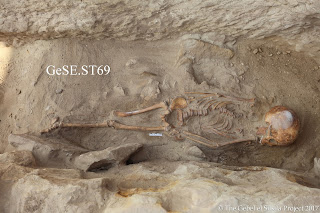 The child burials ST63-64 are the first of their kind found at Gebel el Silsila, in the fact that both were preserved with complete funerary goods. It allows an insight into both material culture as well as funerary customs and religious beliefs, but even more so provides the team with socio-political information and the social status of those entombed.

The child burials also provide with a possibility to study completely preserved inhumations, giving pathological information, i.e. their general health and medical situation, but they are also a strong indication of the existence and activity of complete families on site, supporting the team’s previous hypothesis of a operative society on site in contrast with only quarry activities. The finds bring the team one step closer to finding the village of Kheny (ancient name of Gebel el Silsila) or what possibly was a more local village co-existing with the larger township of Kheny.

The finds follow a line of recent discoveries made by the team, all which date to the Thutmosid period, including 1) an usurped relief scene in the Speos of Horemheb, showing a large ship carrying an obelisk, comparable with the scene of Hatshepsut in Deir el-Bahari; 2) six statues and relief scenes within shrines 30-31 from the reigns of Hatshepsut and Thutmosis III; and 3) decoration and architectural details in limestone from the initial building activity of the Temple of Sobek on the East Bank. Together with the most recent discoveries in the Necropolis, all these finds reveal the importance of Gebel el-Silsila during the Thutmosid period, blooming with socio-political and religious activity.

Funding for this fieldwork has been provided by a grant from the National Geographic Society (grant # HJ-103R-17), Gerda Henkel Stiftung, the Royal Swedish Academy of Letters, History and Antiquities, Mehen and TVAES, along with the kind and generous support of private donors. The team would like to express their deepest gratitude to all support received, without which none of this work could have been conducted.

Background to the discovery

In 2015 the Gebel el Silsila Project reported on the discovery of a series of tombs located in the north of Gebel el-Silsila East, in the area immediately to the north of the famous stele of Amenhotep IV and stretching westwards to the Nile. While the tombs had been described by a few previous visitors to the site, no comprehensive survey, neither any proper archaeological work had been conducted until 2015.

During the first two seasons of excavating the necropolis, 58 tombs were identified, of which almost twenty were excavated. To this day, 69 tombs have been identified, and a total of almost 30 have been excavated. 21 of the 69 tombs are crypts.

The tombs contain various architectural markers, including 1-2 rock-cut chambers, external courtyards, and dressed portcullis – slot-cuts into the door jambs by the entry to the tombs, into which a (stone-) slab would have been placed to seal the door after burial. In addition to the chamber burials, there are crypts cut into the rock, and niches possibly used for offering.

The majority of the tombs excavated so far – with the main exception of two infant burials, two older children/young adults discovered and excavated during the previous season (2016/2017) and the four child burials found this season – have been plundered already during antiquity, and then been left neglected and without further disturbance, and since covered by up to 3m of Nile silt, blown in sand, and fallen quarry spoil and debris.

Some of the individual tombs reveal multiple burials within the same chamber or crypt, possibly complete families, and individuals of varying ages and sex. In addition, the newly discovered infant/child burials present another aspect to the cemetery, clearly indicating family life at Gebel el-Silsila.

The archaeological material produced from the newly discovered tombs and burials chronologically correlate with those excavated previously, so far limited to the Thutmosid period (Thutmosis II - Amenhotep II). In addition to the tombs themselves, the excavation has revealed finely dressed sandstone sarcophagi, sculptured and occasionally painted pottery coffins, painted cartonnage, textile and organic wrapping, ceramic vessels and plates, as well as an array of jewellery, amulets and scarabs.

The vast amount of human remains so far recovered from the necropolis indicates the individuals were generally healthy.  At this time, very little evidence of malnutrition and infection has been discovered, although exceptions occur.  Fractures of the long bones and increased muscle attachments amongst the skeletal remains indicate behaviours related to occupational hazards and an extremely labour-intensive environment. Furthermore, many of the injuries appear to be in an advanced stage of healing, suggesting effective medical care.

Finally, we would like to thank everyone on the

team, and wish you all Happy Holidays!

Posted by gebelelsilsilaepigraphicsurveyproject at 12:27 PM No comments: