Digital documentation of the Speos at Silsila

Any visitor to Egypt who had the pleasure of sailing up or down the Nile past the river’s narrowest point has had the opportunity of gazing into (or even visit) the petite, but intriguing and stunning rock-cut temple on the west bank of Gebel el Silsila. This temple was epigraphically documented already during the last century by R. Caminos, who intended to publish the results as the second volume of his envisioned three monographs of the site. However, as many of you know, with his passing a large bulk of his work remained unpublished, and it was not until more recently – in year 2000 – that Ch. Thiem finally published preliminary results that supposedly were based on Caminos’ work.

However, much remained to be done still, for which the current archaeological team’s Egyptologist and epigrapher – Dr. Philippe Martinez – returned to the rock-cut temple in 2014, and with results that forever would change our perception of the monument. Among the more important findings is a series of iconographic (illustrated) details that push back the chronology of the temple – with examples of images belonging to Tutankhamen, but also a Nile vessel of early 18th Dynasty date carrying an obelisk, comparable in size and style with the famous barque of Female Pharaoh Hatshepsut in Deir el Bahri – but also details that suggest a religious idiom very different from what has been proposed before. Now, this is not the place to go deeper into the various findings of Dr. Martinez, especially as a series of articles are currently prepared, but instead we will focus on the documentation that has allowed Dr. Martinez to take the epigraphic work one or a few steps further from the days of Caminos’ analogue recordings. 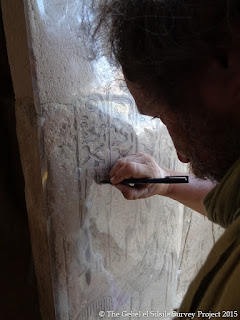 Since 2014 Dr. Martinez has worked with traditional analogue recording methods by means of very thin acetate copies combined with digital photography and layer drawings in illustrator software. These traditional methods laid the groundwork – and still make up the larger part of the data – for the digital recording that was initiated earlier this year (2015). Thus, when Kevin Cain from American INSIGHT joined the team on site, Dr. Martinez had more or less completed the analogue 1:1 copying of the detailed illustrations and texts that decorate the sandstone walls of this small sanctuary. The main aim of Mr. Cain’s work is to complement that of traditional analogue recording methods – not only in the speos, but in various areas of the site – and the first step in their documentation of the speos was to re-photograph each and every wall and detail using both natural light and special studio lights on loan from MAFTO.

The idea was to build so called ‘fronto-parallel orthomosaic views’ of the inscribed walls, which allows us to view an entire wall – regardless of how wide – as one combined image. Also, such photography ‘photogrammetry’ enabled Mr. Cain to produce 3D images, to complement and aid Dr. Martinez in finding further finer details also of older, superimposed scenes.


Below are shown some examples of Mr. Cain’s 3D reconstruction of a scene from the south jamb leading into the inner chamber of the sanctuary.

Shown here, the 3D models incorporate 1/8 of the full image resolution, based on approximately 500 photographs in –m full, -s3, and –F3. Mr. Cain describes the images:

a) The surface re-lighted without colour: the raking lighting angle is a familiar one used frequently in     epigraphic documentation
b) The surface without colour, lighting 180^ offset from above
c) ‘X-ray’ view, highlighting mesostructured. Note that the surface carving is accented in this view.
d) ‘Radiance scaling’ shading, in which the reflected light intensities are dependent on the surface           curvature and material characteristics (INRIA). This view is intended to help represent the 3D
surface with characteristics of a 2D line drawing.
e) The surface, re-lighted, with colour extracted from studio light photography.

Similar resolution images were produced also of one of the criosphinxes in the 18th Dynasty workshop within Quarry 15. Since the sphinx is partially hidden below sand, a complete reconstruction is not possible at this present time. 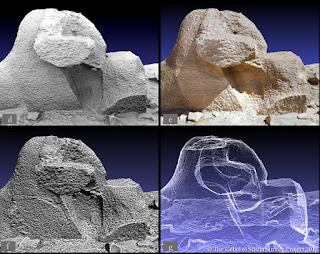 d) Detail of head, without colour
e) The surface, relighted, with colour extracted from photography
f) ‘Radiance scaling’ shading, in which the reflect light intensities are dependent on the surface curvature and material characteristics: note the detail made visible in the shoulder area
g) ‘X-ray’ view indented to show surface curvature

The digital documentation will continue on site as a perfect complement to the archaeological work carried out in the field. Other examples of already recorded features on site include the stela of Amenhotep IV, the fallen naos of Amenhotep III, the re-discovered Temple of Kheny, an administrative building in Quarry 24, etc. Stay tuned for more! 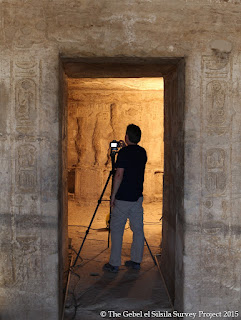 Want to learn more about the awesome work of the INSIGHT team? See here or continue reading for a short summary:

INSIGHT is a California non-profit organization dedicated to documenting the human record for the benefit of researchers and the general public.  We currently focus on bringing computer vision techniques to the work of archaeologists and other researchers in the disciplines that comprise the world heritage field. INSIGHT provides a practical framework for the intelligent application of visualization for sciences and the humanities.  While INSIGHT’s foremost responsibility is to researchers, educational and museum work also an area of interest.

Cultural Heritage Visualization
Recording the past with the tools of the future, INSIGHT was founded to extend the visualization capabilities of scientists and foster education in visualization, with an emphasis on digital cultural heritage.  INSIGHT provides visualization and documentation tools to scientific fieldwork.  Staffed with specialists in both archaeology and visual computing, the INSIGHT team fills the useful role of “translator” between the normally exclusive worlds of technology and heritage.  INSIGHT provides relevant digital tools to researchers and work with specialists to develop visualizations.  Since current technologies are often too expensive for research budgets, INSIGHT believes it is crucial to provide free access to equipment and techniques on a 'pilot' basis.  INSIGHT also provides a research lens through which these digital tools can be profitably viewed.
In a world where time is running out for many heritage sites, INSIGHT is working to speed the process of site documentation.  INSIGHT both develops new tools and adapts digital documentation methods for archaeological use.  Innovative use of space sampling is at the core of all INSIGHT project work, including the use of digital photography, computer modeling, and laser scanning.

Posted by gebelelsilsilaepigraphicsurveyproject at 1:26 PM No comments:

As part of the wonderful news coverage following the re-discovery of the ’lost’ Temple of Kheny, Maria has been invited – as the mission director and representing the Silsila team – to participate in Swedish Channel TV4 and a program called ‘Vardagspuls’ on Wednesday afternoon (at 17.55-18.55 local time). The show will be aired live, but you can also catch up with it later on via their webpage. For updates from Stockholm, please follow the twitter accounts of John and Maria respectively at @drjohnwardkt and @DrMariaNilsson.

Posted by gebelelsilsilaepigraphicsurveyproject at 6:15 PM No comments: