3D Inner sanctuary of the speos

For those of you who enjoy the 3D models, you will be delighted to find yet another two examples uploaded, showing the northern and southern walls of the inner sanctuary of the speos at Gebel el-Silsila.

The long south wall of the sanctuary is decorated in sunken relief, showing almost 40 seated deities uttering wishes of well being for King Horemheb. They have been often described as an Egyptian pantheon. Turned, however, towards the end wall of the temple, they are here depicted as guests to witness a mythological mystery taking place. Smaller vignettes showing priests adoring gods were later added in an empty lower portion of the wall during the Ramesside period. The destructions visible at the left are traces of eradication or hacking done during the end of the Amarna period. They were concealed under a coating of hard 'plaster' when the wall was restored for new inscriptions.


The northern wall offers an interesting parallel to the southern wall, It shows another 'pantheon', in fact a group of invited divinities, but standing in two registers and sculptured in true relief. The relief includes 23 figures mixing gods and goddesses. If the destructions are rather related to unfortunate modern looting attempts, some traces of ancient erasures related to the Amarna period can still be seen. The Ramesside presence is this time limited to one line of text added to the right in the lower empty space. However, a viewer with keen eyes for painted and very faded graffiti will find several traces of such too.

Posted by gebelelsilsilaepigraphicsurveyproject at 5:26 PM No comments: 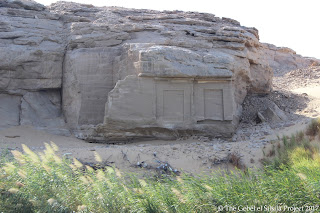 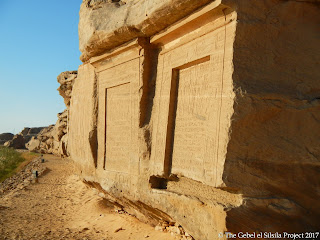 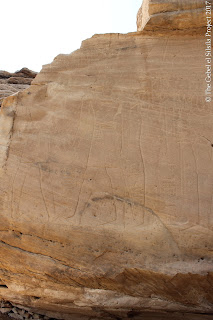 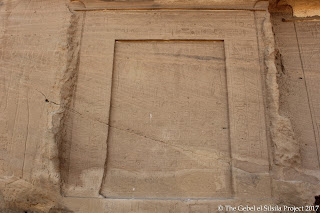 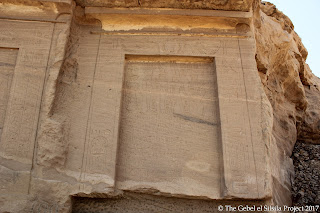 New models from the Speos

The Silsila Team is happy to announce yet some more 3D models from within the Speos or Rock-cut temple of the west bank.

The two models show the Northern and Southern side of the Eastern wall of the sancturary, divided by the doorway.

The Northern side shows divinities related to the control of the Nile Flood and connected to Aswan and the first cataract, as well as the local site of Kheny (Silsila). It is interestingly carved in relief for the upper part and in sunken relief for the lower.

The Southern side shows divinities related to the control of the Nile Flood, this time the Osirian family connected to Abydos in Middle Egypt, but also with Nubia and the South where the Nile flood came from.

Posted by gebelelsilsilaepigraphicsurveyproject at 8:43 PM No comments:

The Project is happy to announce that yet another two 3D-models have been uploaded to our Sketchfab page, this time focusing on Cenotaph/Shrine 4 on the West Bank. The first model shows the shrine as it is preserved today, while the second shows a digital reconstruction and interpretation of how it may have looked prior to the earthquake.

The monument in focus is a niche located on the southern side of ‘shrine 4’ (James and Caminos 1963, 16-18) that has been broken in three parts due to a fracture in the bedrock plausibly caused by a natural catastrophe/earthquake. The room initially measured 1.27 m deep x 1.50 m high. Three statues are seated on a bench, facing forward towards the north-facing opening/door. The three statues depict two men and a woman. While there are no preserved inscriptions or decoration, it can be presumed that the main male figure depicts a man called Djehutmose, who was a scribe of the treasury during the 18th or early 19th Dynasty (based on an adjacent, plausibly associated hieroglyphic text) (James and Caminos 1963, 16).

This shrine, together with 31 more, are currently re-documented and prepared for a new and updated publication, which will include not only the original epigraphy, but also later graffiti, architectural components, and state of preservation by the current archaeological project on site. By means of newer, digital equipment and software, painted details faded to the naked eye, become visible and bring more information in terms of each shrine’s original decoration (see some examples attached herein).

Posted by gebelelsilsilaepigraphicsurveyproject at 5:31 PM No comments:

Dear all,
the Gebel el Silsila Team is delighted to share with you some exciting new 3D-images viewable on Sketchfab.com.

The two published models mark the beginning of a new step in the project, aiming to share with the greater audience and our wonderful, supportive followers some of the unique reproductions of various (published) monuments on site.

We hope you will enjoy as much as we do!

The relief is situated in the rock-cut temple dating to the 18th Dynasty, and more precisely to the time of Tutankhamun/Horemheb (around 1330 BC). It shows the king as a young boy, suckling the local goddess Taweret (often shown as a hippopotamus, but here as an elegant woman), witnessed by his godly protectors Amun, King of the Gods,  Khnum, god of birth, and Sobek, the local crocodile god and companion of Taweret. Through the divine milk, the king becomes superhuman and thus has the power necessary to interact with the gods and the sacred. This ritual seems to have been part of the crowning ceremonies.

This relief is located in the short passage between the main hall and the sanctuary, on the northern wall of the passage, in the rock-cut temple of the West Bank. It shows King Horemheb making an offering to the Theban gods, Amun-Ra and Mut. The figures and texts are sculptured in sunken relief, usually applied for outside decoration, but then everywhere after the Amarna period.