Updates from the Temple of Sobek

Since the initial survey of the Temple of Sobek at Gebel el-Silsila in 2015, the Mission has discovered a connected temple structure towards the Nile containing sandstone foundations, a mudbrick surrounding, and a unique circular shaft nicknamed the “pit of Sobek”. During the excavations thousands of fragments from the destroyed temple were recovered, including raised relief limestone, raised and sunken relief sandstone, stamped mudbrick and a great variety of religious artefacts and daily ware.

Summary of work so far

The Temple of Sobek (Temple of Kheny/Khenu) is situated on a sandstone outcrop, once holding structures build from sandstone, limestone and with details in granite and mudbrick, located along the northern boundary of Gebel el-Silsila east, just below the colonial pump station, and neighbouring the modern canal to the south.  The temple borders agriculture land to the east and north, and the River Nile to its west. The main structure has a west-east axis, with its main entrance opening to the west (i.e. from the Nile). Not much was known about the temple until 2015, when the Mission carried out an initial survey.

The temple was completely dismantled during antiquity, down to its foundation blocks. However, during the excavations, the foundations and bedrock footprints were exposed, revealing a temple structure of approximately 35 x 18 m, which included four dressed floor levels, column bases, and indications of inner and outer walls. The remains of five dressed and raised column bases were located in the temple’s western partition, each measuring approximately 1.40 m in diameter and located 3.20 m apart, 8.40 m across. To the east of the column bases are two dressed and raised squared areas, presumably indicating the architectural divide within the structure (pronaos). Further to the east and placed centrally, is a raised and dressed platform. It is surrounded by dressed surface, parts of which have received linear positioning/indication marks (single and double incised marks) that run in an easterly to westerly direction, and indicate the position of interior and exterior walls, including the walls of four chambers, with each room measuring approximately 3.10 – 3.20 m wide. The exterior walls generally follow natural fractures and formations in the bedrock. The outskirts of the northern exterior wall are inscribed with foot graffiti located adjacent with Predynastic petroglyphs and cupules.

The area to the west had never been surveyed or excavated before. Similar to the main temple, the objectives of these excavations are to estimate the absolute temple boundaries, establish its various chronological phases together with potential diverse uses, understand when and why the sanctuary was abandoned, and how it relates with contemporaneous architecture and infrastructure on site. The study is also closely connected with the Mission’s excavations of the adjacent necropolis in that they equally generate a view of the ancient life the people of Kheny experienced. Such results can be reached through the integrated analysis of religious practices and material culture. In a larger picture, the results can be compared with previous research into quarry activity and life all together at Gebel el-Silsila.

According to local farmers, the area was flooded annually until the 1970’s, resulting in the accumulation of a large pile of silt and sand debris around a large tamarisk tree. Mixed in the debris and scattered on the surface were large amounts of Roman ceramic sherds; and prior to excavation the team found fragments of painted and dressed sandstone and limestone, equivalent with material documented in the main temple. The mound of silt and debris rose to several meters above the natural sandstone slope. Simplified, its stratigraphy consisted of five main layers, listed from above to below:

1) upper stratum of modern debris (mainly remnants from the making of the new canal);

3) lower level of pure Nile silt brought by the annual inundation (which at the centre of the pile contained annual shedding of the tamarisk tree);

The central area contained evidence of a Roman kiln (approximately reign of Antonius Pius), surrounded by large amounts of pottery sherds from this period. Intermingled with the pottery was a varied combination of items associated with everyday use, such as fishhooks, nails, animal bones (mainly catfish), etc. The Roman layer also contained a significant amount of fragments from the original temple, including decorated and dressed sandstone and limestone details, fragments of sandstone flooring, and artefacts indicating cultic life, such as a small votive of a crocodile. 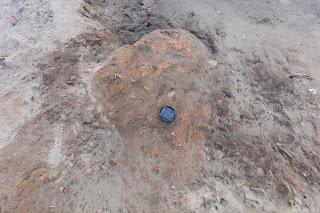 In the central area, and below the kiln level, we cleared a rock hewn circular structure at 6 meters deep into which numerous fragments from the original temple had been disposed. Several limestone fragments contained raised relief decoration and hieroglyphic text, although in a poor state of preservation. To the north-east of the circular structure we discovered fragments of a sandstone door, including its lintel, with hieroglyphic inscriptions from the reigns of Amenhotep III and Ramses II respectively. A sandstone fragment of a left doorjamb contained the Horus-name of Ramses II, while the title of Sobek, as “Lord of Kheny”, appeared on another. Footprints of another door (doorpost and semi-circular wear grooves) were found in the southern part of the sandstone structure, surrounded by mudbrick of 18th Dynasty measurements. Excavation work showed that the mudbrick structure was aligned with the sandstone foundation blocks, and is currently believed to have had a function of an embankment. The archaeological work has now connected the western structure with the main temple, and thereby allowing an estimation of the sanctuary’s greater extension.

The method of excavation is to remove the surface layer, following the bedrock where exposed, or remaining blocks. The area is documented by means of photogrammetry pre-, para-, and post-excavation, combined with traditional archaeological recording techniques, photography and GIS mapping.

The work consisted of a continuous investigation in and around the pit of Sobek, including the recovery of dressed, painted and architectural elements from the destroyed temple. The gate/pylon area was explored further, as was the investigation to the south of the hypostyle hall. The main effort, however, laid on the investigation of the eastern boundary of the temple in agreement with the orders given by the inspectorate of Aswan and Gebel el-Silsila. There, the Mission discovered the foundation blocks of the south-east corner and the continuing eastern part of the sandstone enclosure wall along with fragments of the main cult statue (Sobek) and the statuary face of an 18th Dynasty pharaoh. In addition, work was carried out regarding the removal and landscaping to the external areas of the temple, redefining the boundaries of the temple to the north and east, and the initiation of the construction of a temporary wall to the northern and eastern boundaries. All work in the temple involved daily archaeological documentation, photography, and photogrammetry, and all temple artefacts and stone fragments were registered.

Posted by gebelelsilsilaepigraphicsurveyproject at 5:04 PM