With time being short at present, this little update from Silsila will mainly consist of a photographic journal. Since our Sarah left and brought with her the desert sand to the UK, we have had the great pleasure of having Professor James Harrell with us on site. As always he provides us with great geological expertise, helping in the process of categorizing the various lithic materials used by our Prehistoric ancestors for tool making, and it goes without saying that we have had some wonderful hours of discussing quarrying techniques, transportation and the various elements that can help us in setting up a chronological system based on extraction methodology. Our hope for the future is for Jim to return and begin the (long) process of establishing the various geological aspects of Silsila, to figure out the various levels and orientations of the Nile (and its canals), and maybe learning more about the smaller geological differences that can aid us in confirming where the exact source was for the stone that now makes up some of Egypt’s most marvelous temples.

During our fifth week at Silsila, the rock art survey has continued and resulted in another couple of Prehistoric locations. More information was gained regarding the Middle Kingdom presence in the far south, and we were pleased to find another two cartouches belonging to the 12th dynasty (more on this eventually!). Lovely as it was, it was strange indeed to try to continue the recording process when the sky suddenly turned almost purple, once again being hit by a lightning and thunderstorm.

For now, the Silsila team takes a break of one week in order to attend the upcoming event of CRE XV in London. The team will be represented by both John and Maria in accordance with the schedule embedded here. Once back from London the survey resumes for another two weeks; we hope you all join us (virtually) there and then! 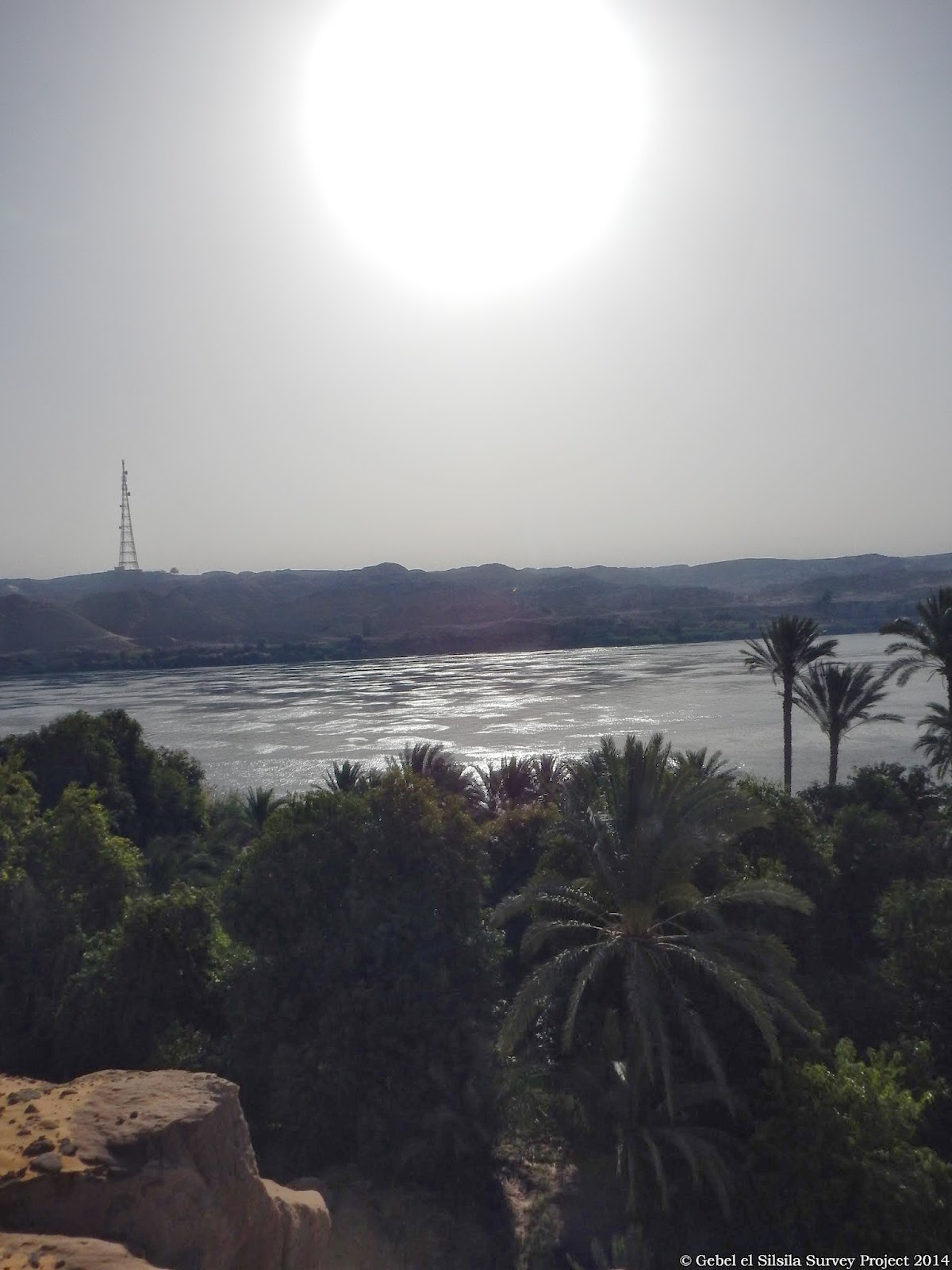 Gebel el Silsila, with its series of cenotaphs, stelae, the speos of Horemheb and the grand sandstone quarries with majestic cathedral-like galleries on both sides of the Nile, has long attracted the attention of scholars, laymen and adventurers alike. Its quarry walls and cliff faces display with a great variety of graffiti ranging from Pharaonic hieroglyphic and hieratic texts to Ptolemaic and Roman demotic, Greek and Latin inscriptions; from stylistic Prehistoric rock art to elaborated figurative representations of later ancient periods: carved and painted commemorations that were recorded over a c. 15 000 year period by nomads, traders, workers, priests and rulers alike. This paper aims to present a visual and descriptive journey through a sandstone landscape bestrewn with pictorial and textual representations, opening with some of Egypt’s oldest illustrations and concluding with attestations of the more ‘modern’ records carved by scientists of the Napoleonic expedition, early explorers and adventurers; there between is presented a brief prosopography of workers and visitors that still today make their presence known in form of adoration and dedication texts once carved into the quarry faces after completing the season’s extraction work.

This presentation will deal with the various extraction techniques and methods employed in the great sandstone quarries of Gebel el Silsila. Our time perspective ranges from the Middle Kingdom to the Graeco-Roman period as documented by the Gebel el Silsila Survey Project. We will explore the evolving technologies within the engineering processes, and pay particular attention to the trench styles and fracturing processes that were utilized to separate the pre-dressed blocks from their bedrock foundation. We will discuss the varied sizes of blocks and how these influenced the development of the individual quarries and subsequent transportation techniques, but also as part of chronological changes such as seen during Akhenaten. The preserved transportation devices at Silsila – from ramp systems, corridors, causeways and riverside quays – provide us with a series of windows into the ancients’ methodological work process and inform us of how the distribution of stone blocks played an integral role in the overall enlargement of the sandstone quarries. The material will be presented also in a more socio-anthropological perspective as we will consider the ancients’ greater understanding of the sandstone’s geological features in general and how this understanding led to an overall expansion of quarrying activity at Gebel el Silsila.

Posted by gebelelsilsilaepigraphicsurveyproject at 8:27 PM