“Wait a sec, I’ve got sherdy hands,” has been my favourite phrase this season. Occasionally, when John and Maria have been showing visitors around site, or just when it seemed a pity to disturb baby Freja’s slumbers, I have been called upon to be employed in a spot of babysitting. So, when Freja calls out, I’ve had to quickly dust the sherdiness from my hands before picking her up to soothe her. A new experience for me this season!

The rest of the time I’ve been working on the new inflow of ceramics from the different campsites around Silsila, and also working with John on how to plan and draw sections of the various dry stone walls we’ve been encountering. This season, we’ve focused more on the West Bank, including the infamous pottery hill, but also its sister sites Pottery Hill 2, Wadi Tean and Mo’s Tavern. Further North we have identified at least another 4 camps close to the New Kingdom quarries and cartouche of Tutankhamen, and I worked a bit on one of them Black Camp. On the East, we investigated some of the hut clusters above the main quarry. With each week, I’m adding to the site ceramic typology, which means that I can work even faster. I’m now starting to see the same types occurring again and again, which is brilliant as I can simply count the same types, record that I have for example, 4 rims type of 8.12 (which is a narrow necked direct rim storage jar in case you were interested).

What sort of things have we been encountering? Well, at Mo’s Tavern, which is across the Middle Kingdom road from Pottery Hill, we found some of our first complete pots, or at least complete profiles of vessels, including a rather fabulous 48cm diameter coil-built lid (Nile C GES14/MT/C5).

It took us 2 trips to find all the pieces scattered as they were down the hillside. The top of Mo’s Tavern is relatively sterile, with the remains of one hut and 2-3 possible hearths or beacons. It is likely that it was not in continuous use due to the infrequency of sherds, how little they had been moved or broken up, and the fact that most of the sherds uncovered were able to be fitted together cleanly. Most of the material from Mo’s Tavern, Pottery Hill, Wadi Tean and Pottery Hill 2 (all within a c200m radius) seem to be contemporary Early Roman (1-2nd Century AD).

Some of the material from Pottery Hill may be a little later up to the time of Emperor Hadrian and comparable to the ceramics uncovered at the quarry site Mons Claudianus by Peacock and Tomber in the Eastern Desert. Pottery Hill is also interesting in that so far, no bread trays or cooking vessels have been uncovered there. The ceramic assemblage is in the main, amphorae, meat jars, storage vessels and water jars. All Roman period. The only finewares uncovered have been the Aswan-made Barbotine vessels, which are rich in Kaolinite and give a beautiful white appearance. So far we have no Samian or African Samian wares.

The other campsites that we have been investigating include the huts above Corridor A in the main quarry. If you recall last season, we counted over 4000 surface body sherds in this very small 30m area. Here we are getting quite an interesting range of dating material (though mostly eating bowls and water jars) from the New Kingdom (18-20th dynasties 1550-1069 BC), then a jump to the Ptolemaic and Early Roman periods (323 BC - 117 AD). It seems that up on the escarpments above the working quarry faces, the quarrymen took their pack lunches to enjoy the view of the Nile and perhaps have a short nap in the huts in between shifts to get out of the hot sun.

A picture is starting to develop at Gebel Silsila that fits in quite nicely with the dates of the inscriptions with the last periods of occupation of the quarries, with the ceramics pushing back the dates a little. The latest dated Roman inscription names emperor Claudius (AD 41-54), whereas some of the pottery from Pottery Hill (e.g. the Barbotine) is perhaps a little later to the time of Emperor Trajan (AD 98-117). The Romans clearly spent quite a long time working at Silsila, as the various sandstone Roman temples testify to, but also to the great quantity of camps with lots of pottery dotted across Silsila. Next season, we plan to work quite solidly at Pottery Hill on the West Bank, which has c23 circular dry stone huts and a vast quantity of ceramics to be explored.


As always, Gebel Silsila is a remarkable place, with great beauty and wonders to behold across the whole site. There is so much to be learnt here about the everyday Egyptian, and I cannot wait to return to join with the team again. A small success, I managed to convince John to wash his feet and lucky socks! 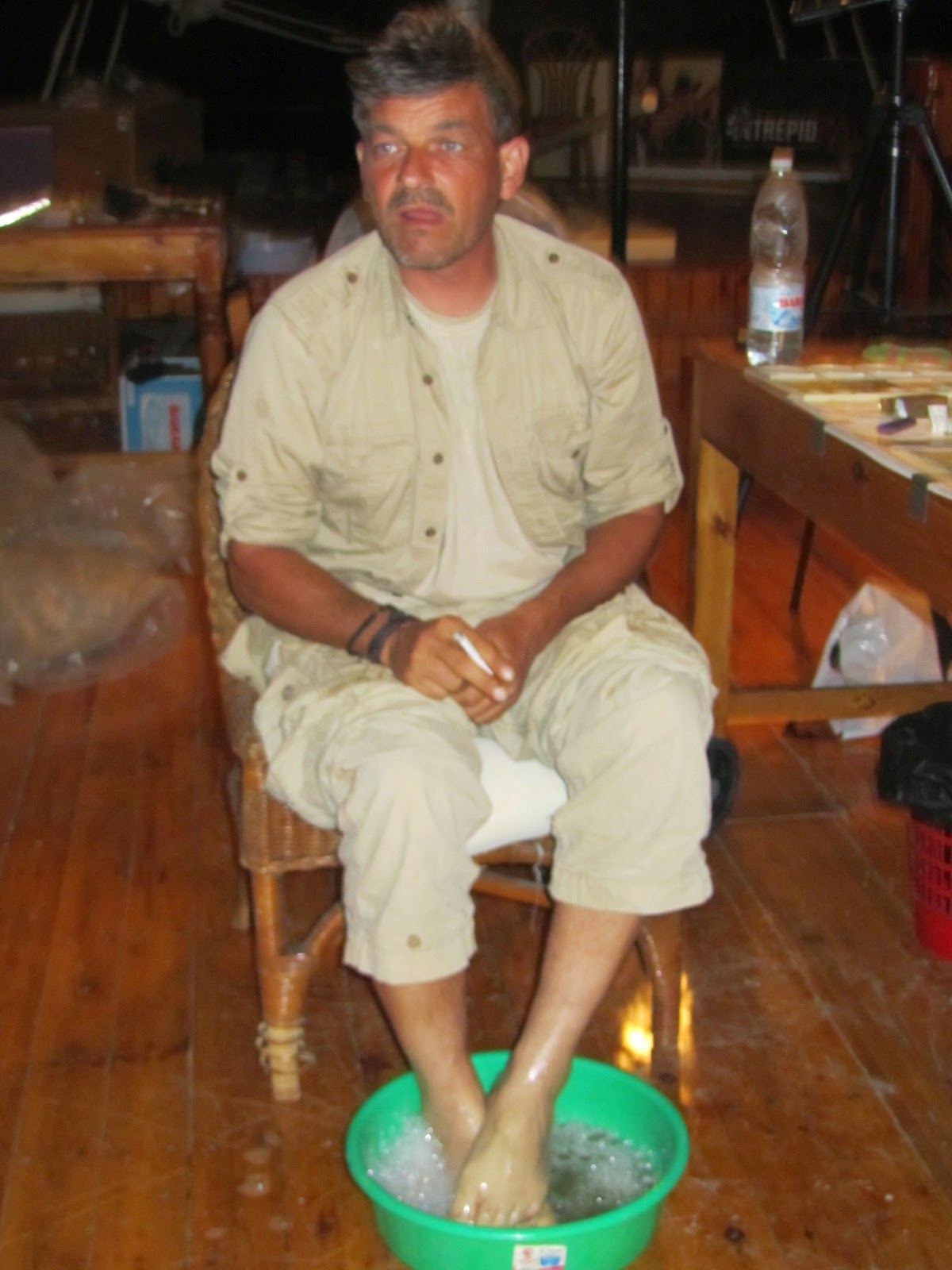