Halfway into the spring season


Madam Silsila, mother of a vast amount of Upper Egyptian sandstone temples, keeps opening her box of secrets to us as each day goes by. Like Adrienn briefly reported last week we were thrilled when John and Ahmed Sayed (general inspector from Kom Ombo and a good friend who made us the honour of joining in this specific day) found two intact oil lamps and another fragmentary one; this as part of making some great progress in locating another living/workmen’s quarter embedded within the huge spoil heaps. As part of the survey of this area John and Mohamed (our inspector) documented a small stone structure on top of one of the hills that had captured our interest already before. Working on top of a small hill in constant sunlight in the middle of May is not always an easy task, but our brave and persistent topographers made their best effort and soon presented great results! John will tell you more about this work in a few days, but even before that I would like to praise both John and Mohamed for their great work, which has resulted in important information about Silsila not only from the ancient side of things, but also from the continuation of the site and more interestingly the continuation of religious practice! Since I have not written a blog post myself lately, I would like to take the opportunity to say thank you to our previous inspector, Mohamed Abdulla, and at the same time welcome our new inspector, Mohamen Mohsen to the team.

For Adrienn and me, this fourth week meant returning to the main quarry where we worked last year. From a very personal perspective returning to this large quarry always brings with it an emotion similar to returning home, and regardless of how many times one has viewed the details of the gigantic quarry walls, there is always more to find! This fact is known to almost every epigrapher and rock art recorder out there and the importance of returning to a site during different hours (and even seasons) and in different light cannot be stated enough (yes, I know I have said it before). So, Adrienn’s “harvest” of this week contained another few interesting inscriptions and for me I was happy to locate some painted pictorial graffiti as well as various etchings that had escaped me previously. Also, it was not only our topographic “department” that was successful in finding interesting items this week. Four sandstone fragments were found with pictorial representations; one of which depicted an armed soldier holding a shield and spear! More information about these findings will be revealed as soon as we can!


As many of you know, Egypt celebrated Sham el Nessim this week and it was a pleasure hearing and watching all families that came to visit Silsila to swim, enjoy each other’s company and mark the beginning of the summer. Meanwhile we took the opportunity of enjoying the beauty of Silsila West’s many monuments, strolling along the riverbank and appreciating the environment in which we work. Returning to Silsila East again on Tuesday I was once again reminded of Silsila’s beauty and still so untouched natural surroundings as I was joined in the main quarry by not only one, but four (!) absolutely gorgeous owls (type Pharaoh’s eagle owl, I believe). It was an entire family with two very fluffy youngsters, with their nest just in front of one of my personal favourite quarry walls. The first day of my “arrival” Mother Owl looked at me with suspicion in her eye, but somehow I caught her interest since she and one of her youngsters kept following me from one place to another, usually with some 15-20 meters between us and at a safe high location. On the third day she felt relaxed enough to introduce also the second youngster, at the same time as she no longer felt the need of keeping watch all the time, allowing herself a nap in front of me. For some of you, you already know of my love for animals and how much I appreciate these moments when nature present herself in her most beautiful way, so I need not say how much these three days meant for me!

Anyway, I will end my little week report inspired by the words of Cruz-Uribe as he expressed it in his April fool email (on the EEF List/forum): much of the work was the same from one day to another, maybe there will be more to report next time... ["I looked at some Demotic graffiti. My inspector refused to climb the ladder up to the top so I had to go by myself.  Nice views and so good shots of some graffiti."  Maybe next field season will be a bit more exciting.” EEF: An April 1 Report of News From Egypt] 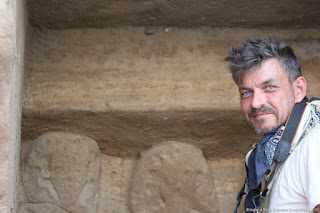 Posted by gebelelsilsilaepigraphicsurveyproject at 6:07 PM