Starting a new season at Silsila


Indeed, the Gebel el Silsila Survey Team has returned to site for another exciting season of fieldwork! The 2014 spring season stretches from 1 March to 1 May with the somewhat two-foldeded ‘theme’ of ceramics and rock art. It goes without saying, though, that the quarry marks’ project, topographic documentation and general surveying continues alongside with the two main themes. New members to the team this season, and who have already joined us (more to come…) are archaeologist and chief inspector Ahmed Sayed, inspector Mohamed Hamdy, and ceramic specialist, Dr. Sarah K. Doherty; all of which we are very grateful to have on board. And as a special welcome, we asked Dr. Doherty to open up this season’s blog updates: 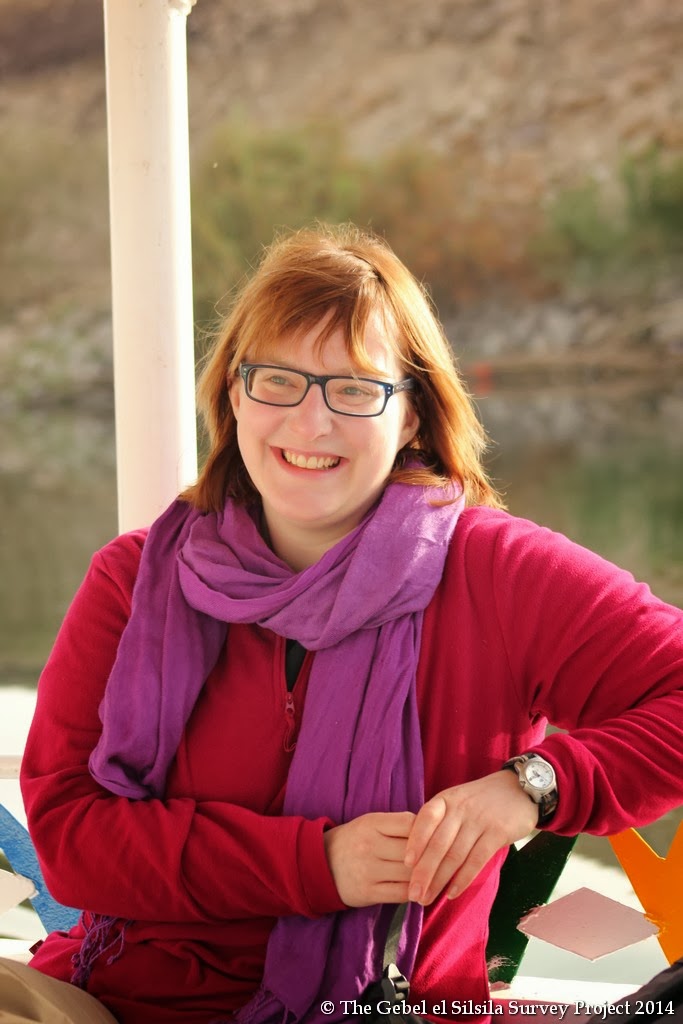 
Hello friends and confidants of the Gebel Silsila team! I am delighted to be the newest member of this esteemed group, joining Drs John Ward and Maria Nilsson as their pottery specialist, together with Inspectors Ahmed Sayed, Mohammed Hamdy and assistants Salah and Shahad. I hope to confirm some of the dates already postulated by Maria across the sites, get to grips with what they were doing (i.e. eating, storing, preparing) in which areas and (leading on from my PhD on the potter’s wheel) how these vessels were being manufactured. Potentially, we have Epi-Paleolithic, Predynastic, Dynastic and Roman sites dotted throughout Gebel Silsila due to the various rock art and inscriptions already identified. Unfortunately, I can’t help much with the Epi-Paleolithic, but I can give the later periods a go!
This week, we have been mostly in Quarry Q34, known as the Main Quarry, or Horus of Edfu quarry, on the west bank of the River Nile. This has been named due to the various harpoons carvings and graffiti dedicated to Horus. A truly awe-inspiring place, hidden from view when on the river. Walk a short distance up a curved path and step into a cathedral of chiselled vertical stone, complete with 13m high walled corridors. The floor is filled with sandstone chips, sand and dotted with pottery fragments. The echoes of the walls make Silsila a little eerie, it is not hard to imagine the din that there must have been in ancient times. One can hear the smallest rock fall, just think of one thousand quarrymen chipping away! 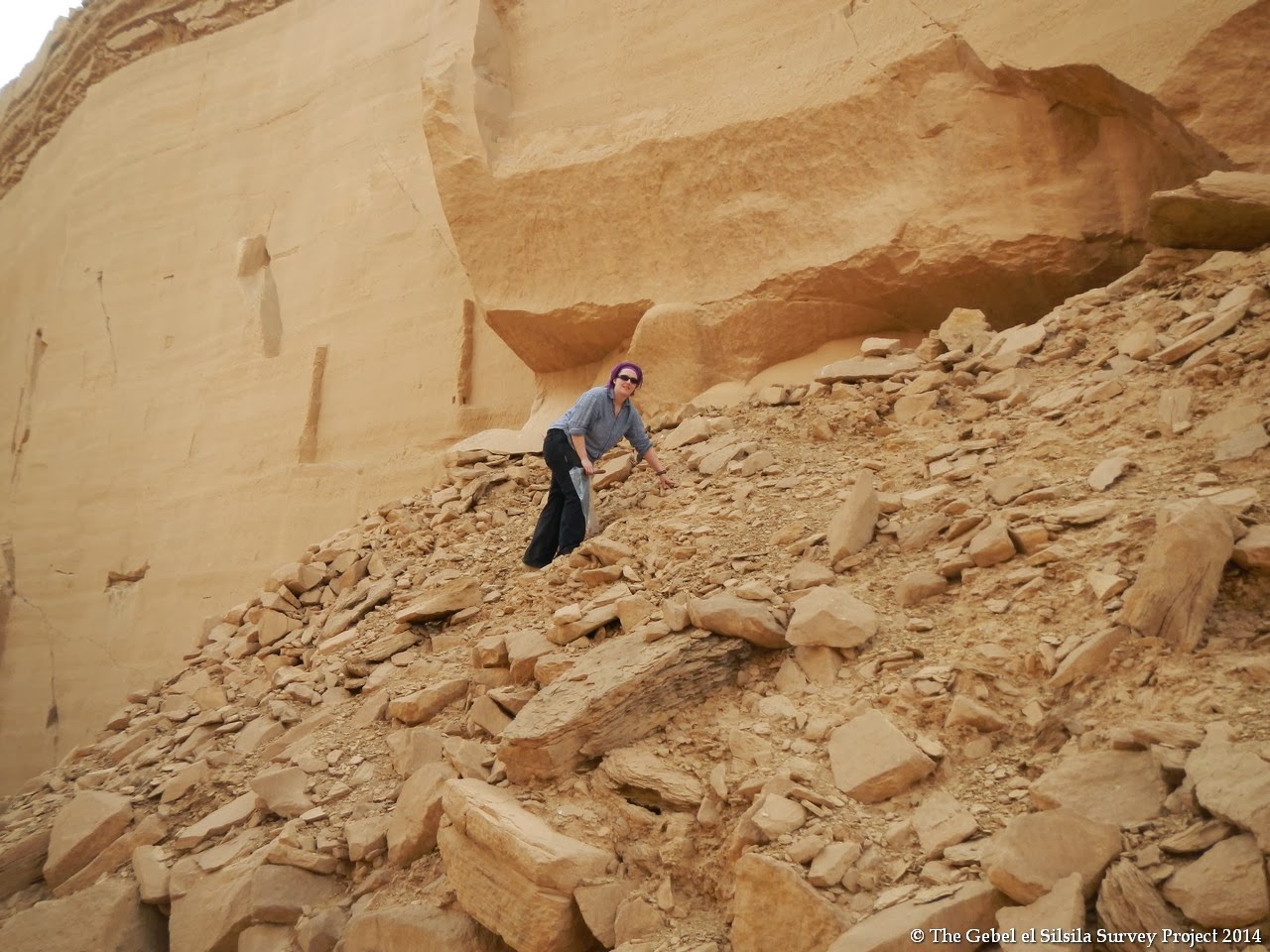 Pottery search in the Main Quarry


After much discussion with John, we gridded out the area and began field-walking and collecting pottery sherds (and hopefully some vessels!). As this site has been little studied in terms of pottery, we are starting from scratch here, an exciting prospect for me! This means a full collection, processing, and identifying of each diagnostic vessel must be undertaken, which requires quite a lot of work, together with my recent converts to sherd nerdom John and Mohammed. A little bit on the method for those interested: After the pottery has been collected, we wash it, leave it to dry, separate the different clays of the body sherd (Nile Silt, desert wares, Roman, Islamic and foreign, Madam Silsila has it all folks), count and weigh it. The diagnostics (i.e. identifiable features such as bases, handles and rims) are then set aside for even further study. These are quantified, registered, drawn, labelled and photographed. After which the identification and dating can take place. At the close of this first working week, over 2028 sherds have so far been processed... I’m hoping we can double that effort next week! John doesn’t realise this yet J 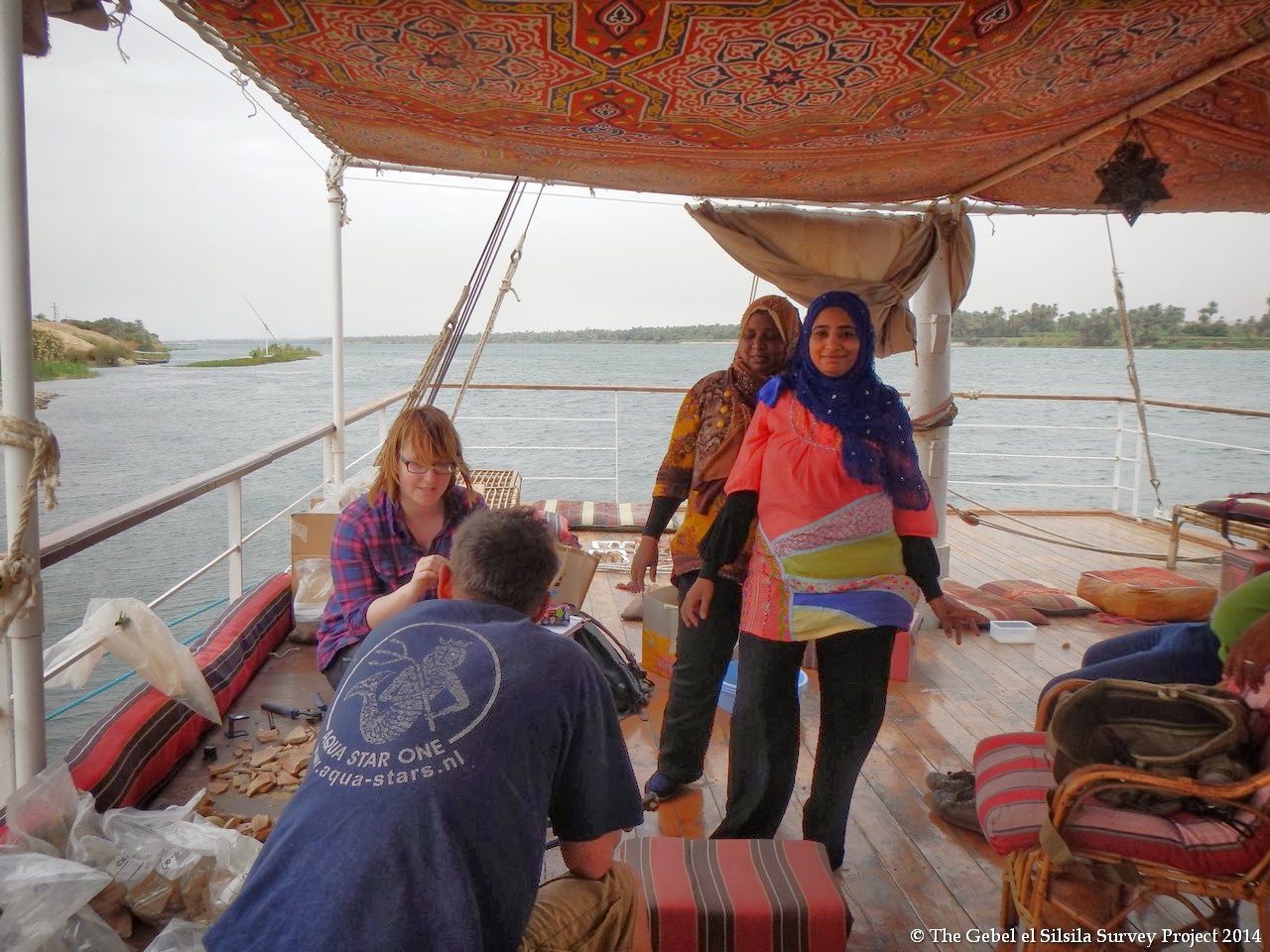 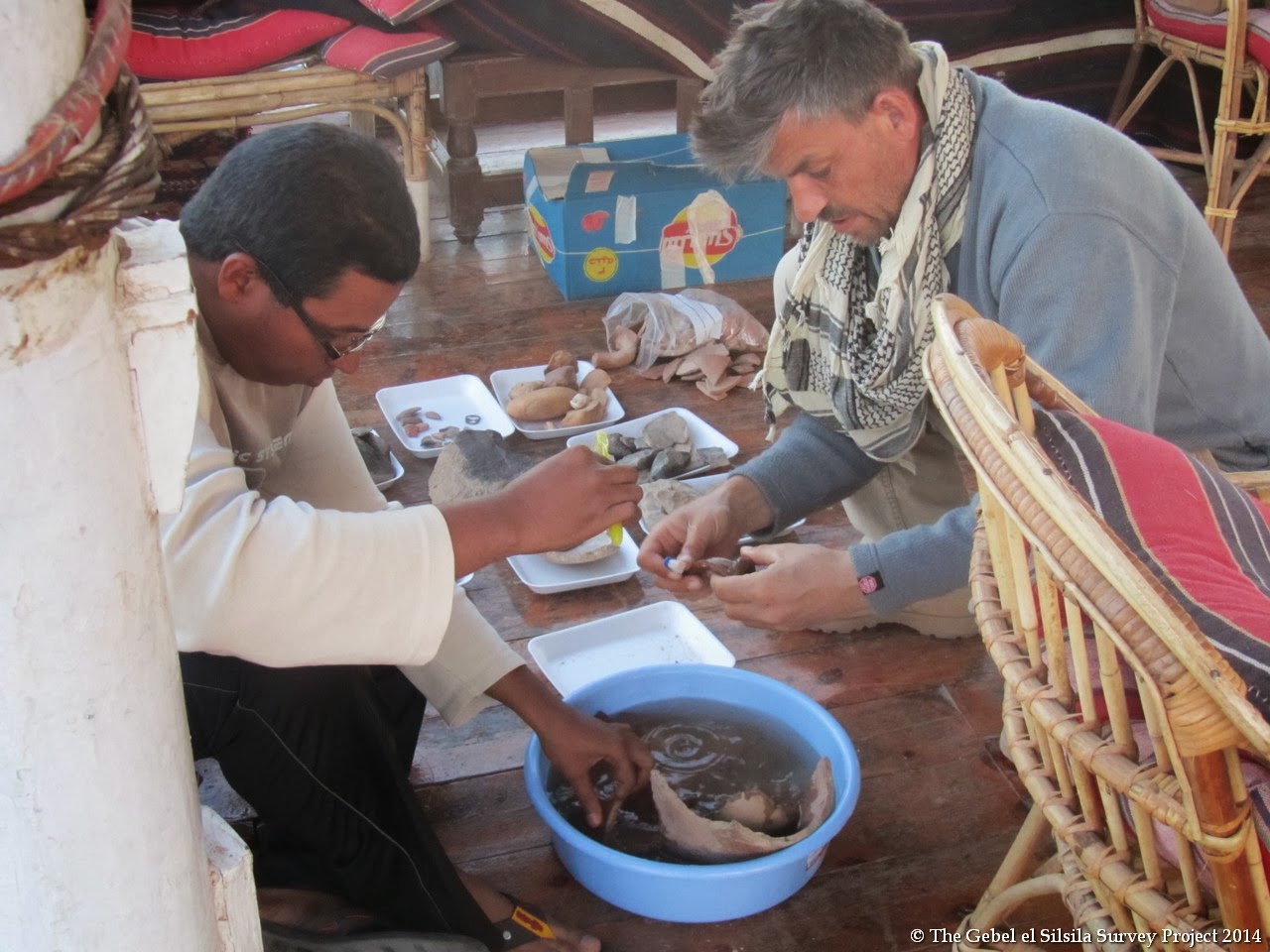 Mohammed and John washing pottery
Sarah
Twitter sherd_nerd and find me on academia.edu 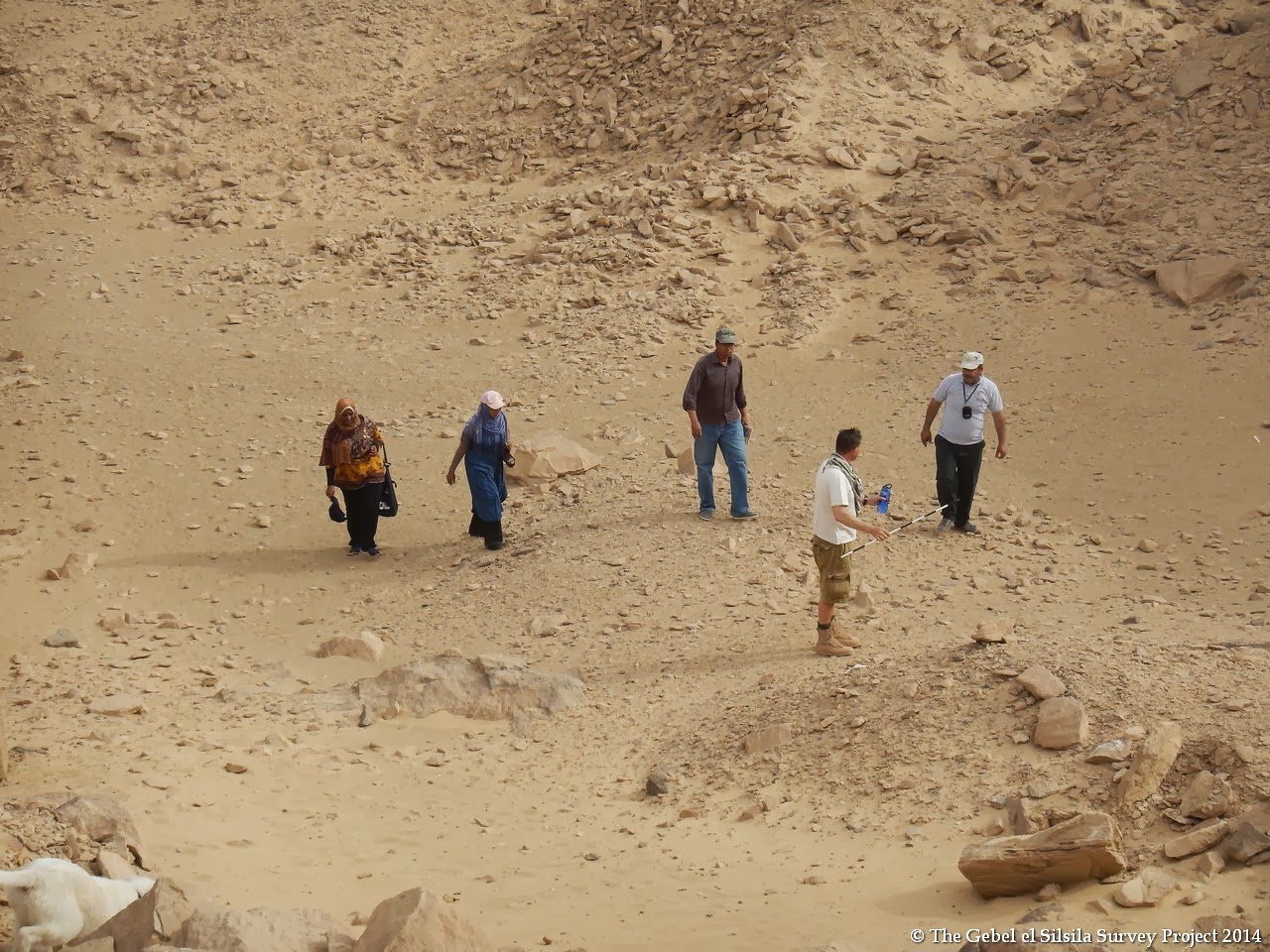 Excursion in the field as part of our female inspectors' training


And a bit from John too (more to come on our weather adventures during the first week): 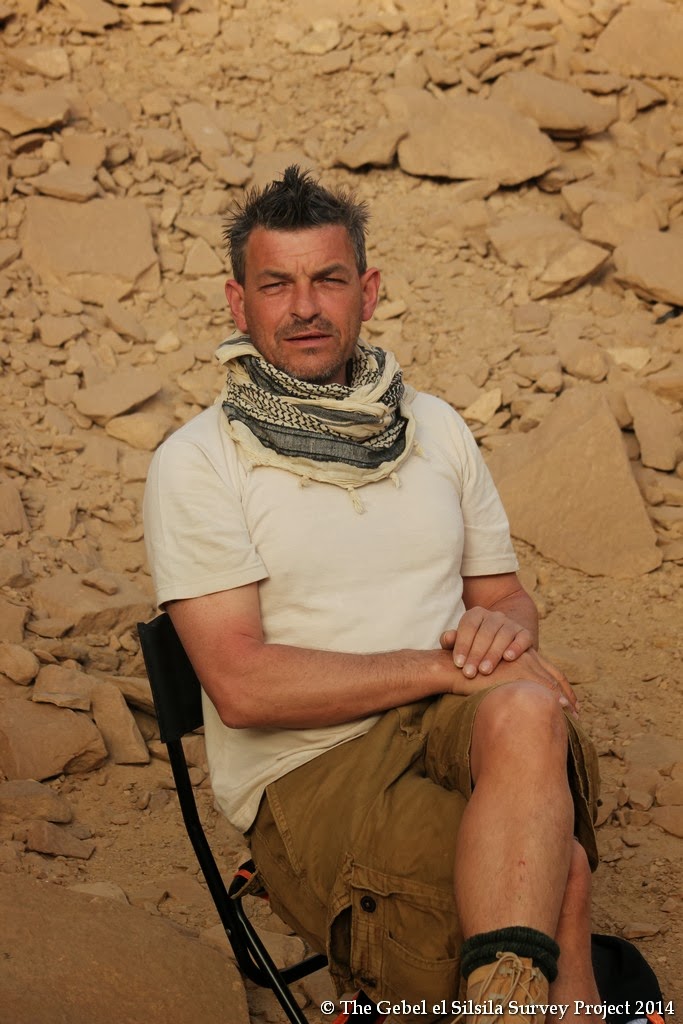 what would a field study be without access to a chair? ;-)

Well here we are, second week in on our third year of surveying Gebel el Silsila. It's been an eventful 12 days, not only with the arrival and all the setting up, that usually takes time when beginning a new season, but also as I have split my time between off the boat, surveying with Maria, and on boat with our new pottery specialist Sarah Doherty, who has joined the Silsila team to lend her expertise to the plethora of pottery we have on the east and west banks respectively.
After clearing the decks so to speak, we spent the first couple of days collecting pottery sherds from the main quarry on the east bank. This was not only back breaking to say the least, but I must admit fun at the same time.  Sub-dividing the quarry into its various sections, we painstakingly collected the surface pottery for further analysis aboard our boat moored off the Speos of Horemheb on the West Bank of Silsila.


With hundreds of pottery fragments to sort through, Sarah has proved to be quite they teacher as she took me through the steps of identification and classification of the various shreds as we emptied bag after bag on our makeshift sorting table.
After sorting through the assortment of sherd we separated them into three types, Nile silt, Dessert or Marl, and diagnostics. The final one, diagnostics, pertained to any pottery that had retained any identifiable features such as handles, rims, bases, decoration etc. After the weighing and tagging came the enjoyable task of cleaning the diagnostics, and then applying their individual classification numbers for identification purposes.


So 12 days in and were we finally getting around to drawing the sherds section by section. But as I said at the beginning not only have I been helping and learning from Sarah the art of becoming ceramicist, but also carrying out the continuing task of surveying the West Bank of Silsila with Maria  and the rest of the team. Taking in the south of Silsila as the main area of interest we have continued where we basically left off last season, by retracing our own footsteps through the wadis and and ancient trade routes that crisscross the southern areas.
Now, if the first week is anything to go by, I'm sure my feet will finally touch the ground sometime around Christmas!

and a brief photo diary of the start of the season 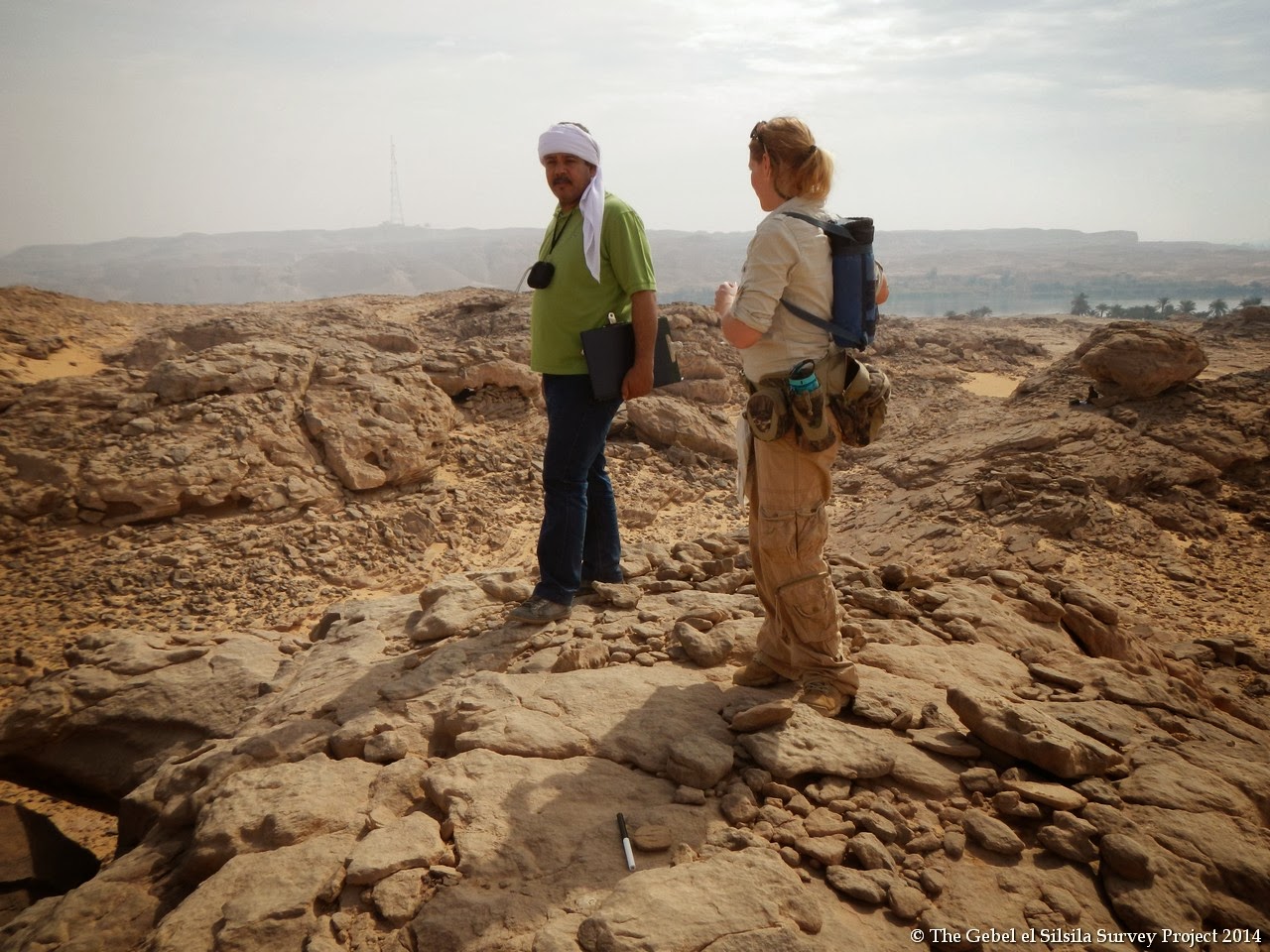 Ahmed and Maria in the field 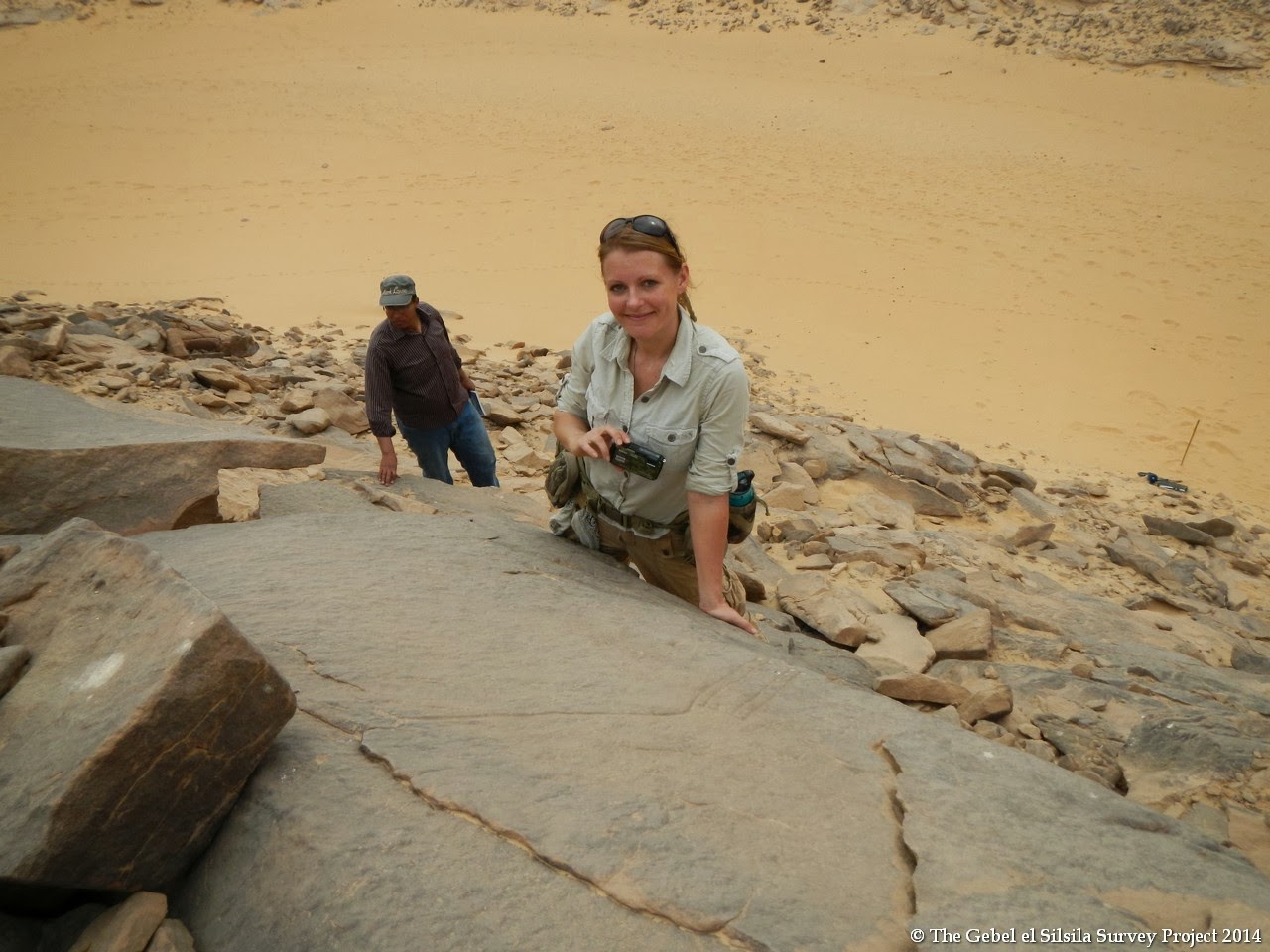 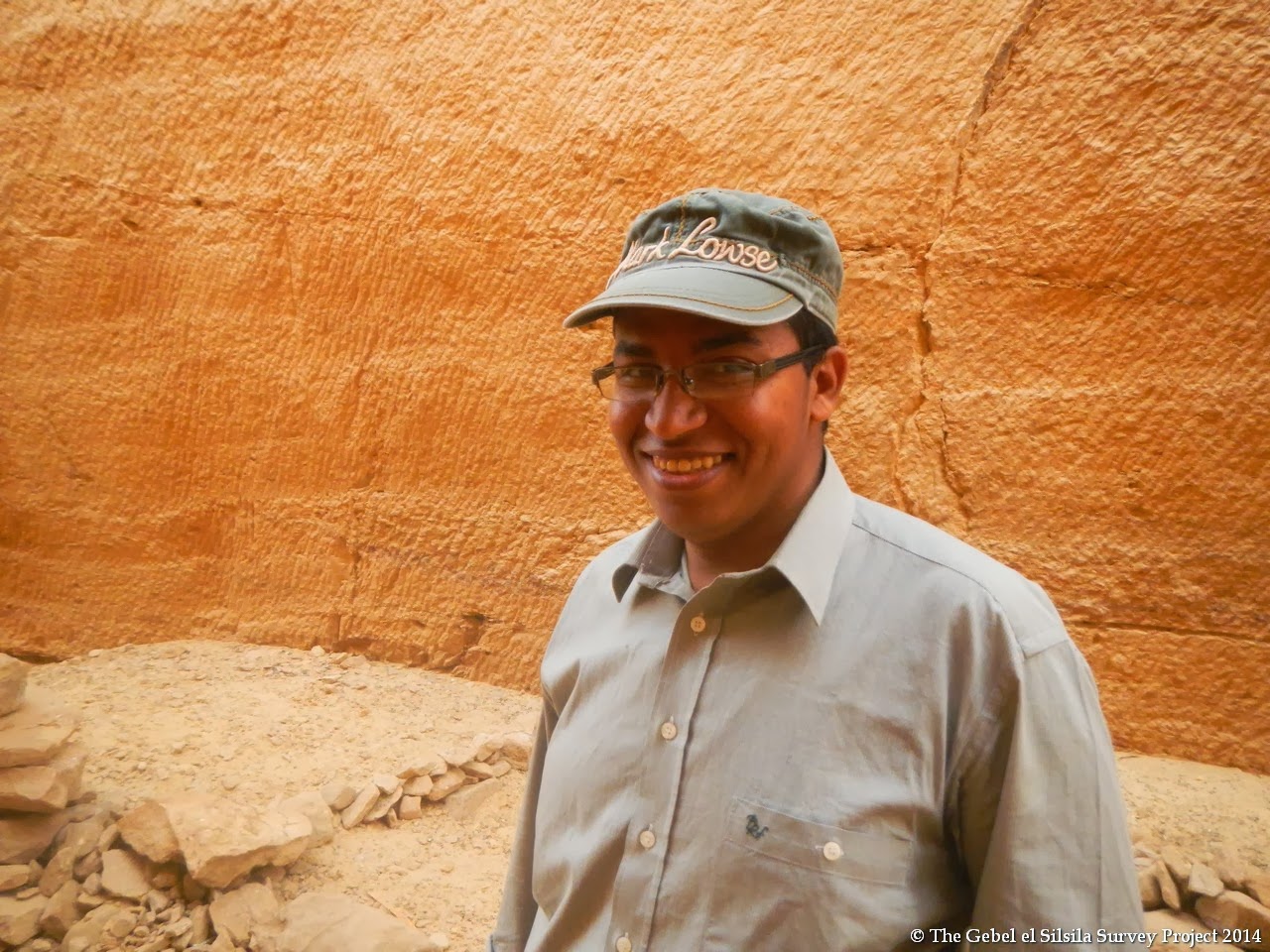 Introducing to the team Mohammed Hamdy 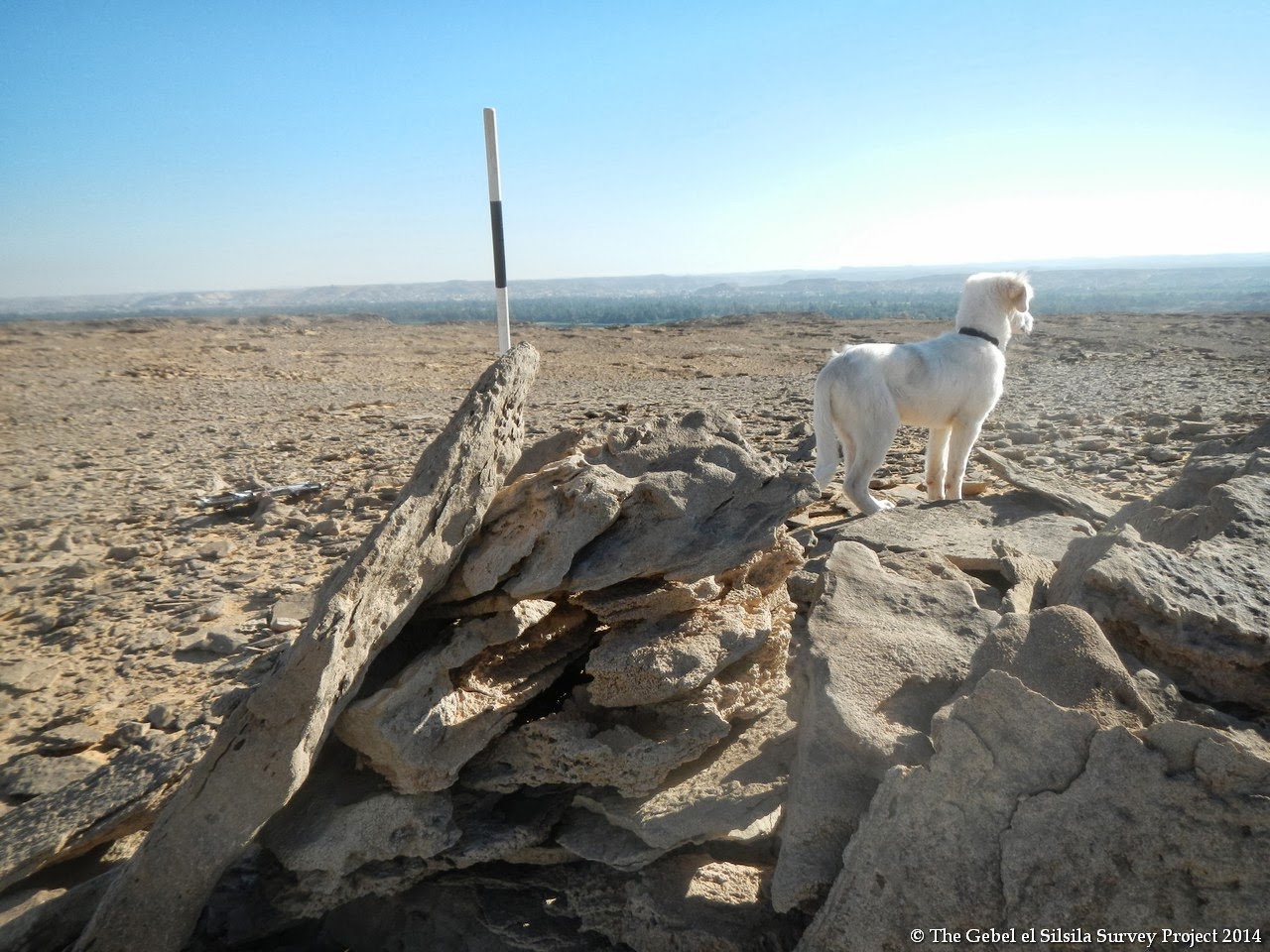 The mascot of Silsila - Carter! 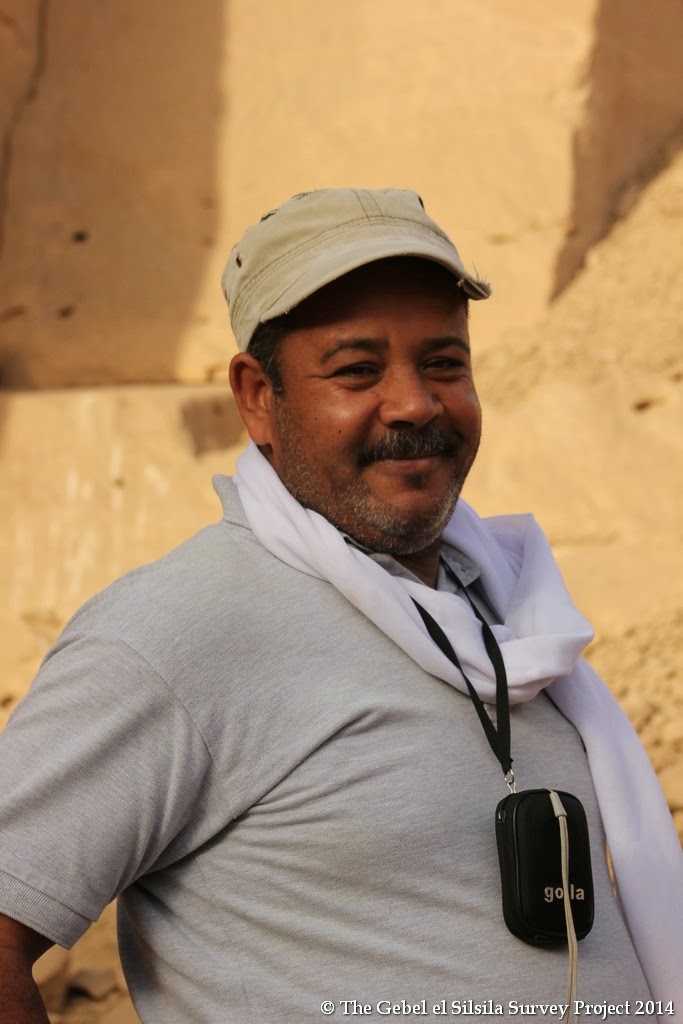 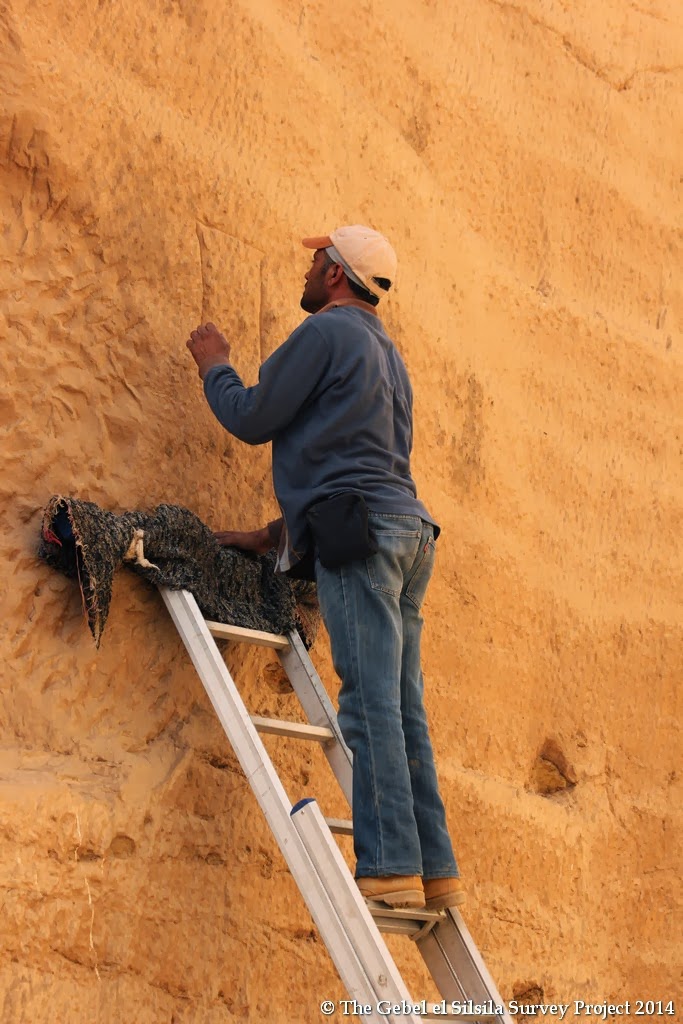 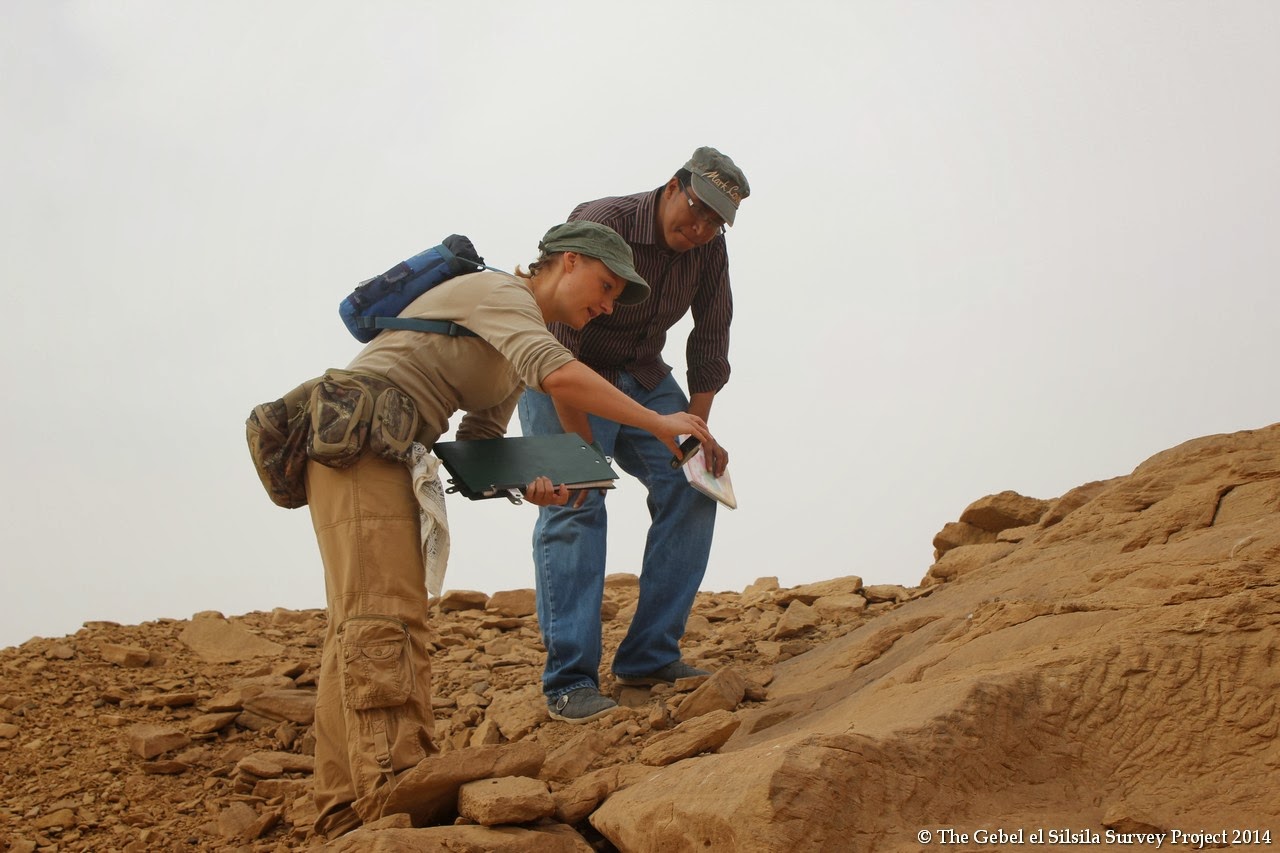 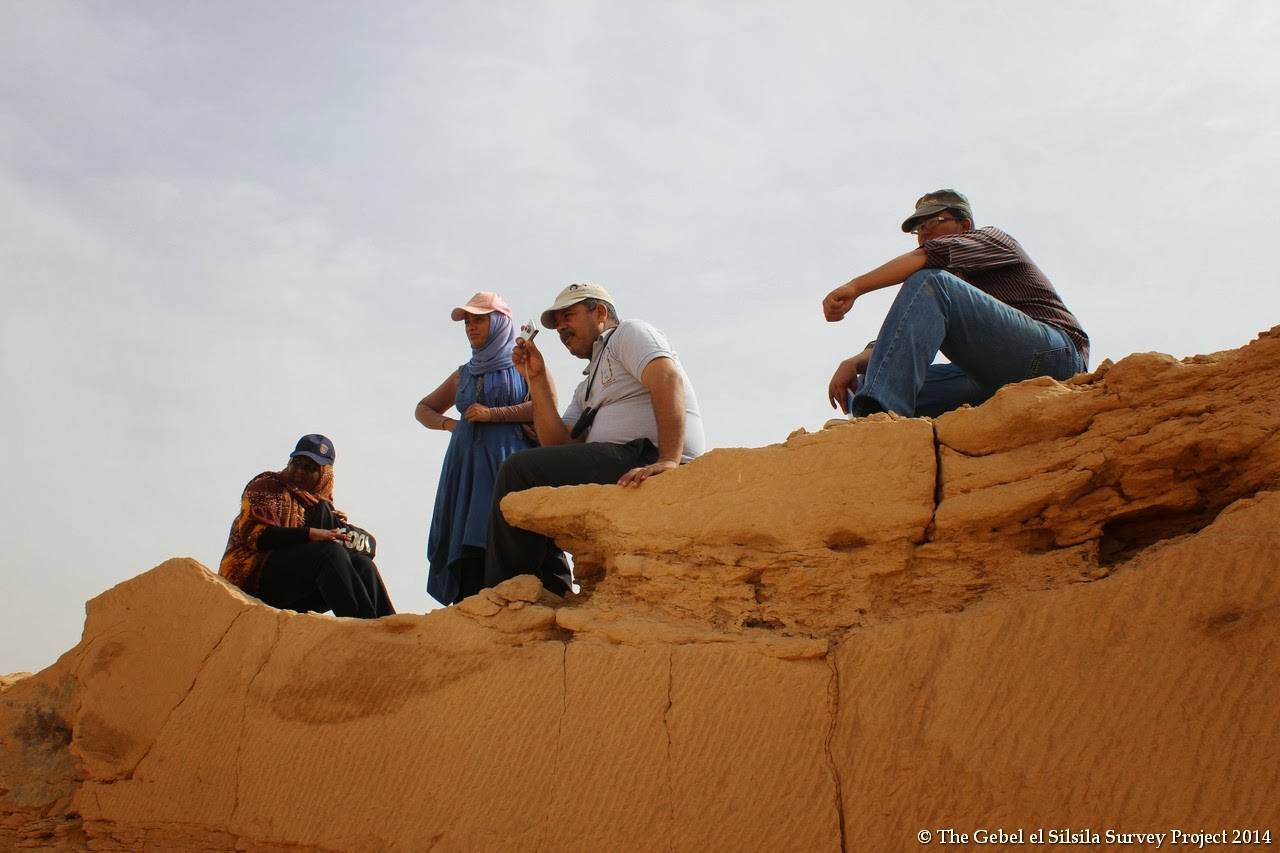 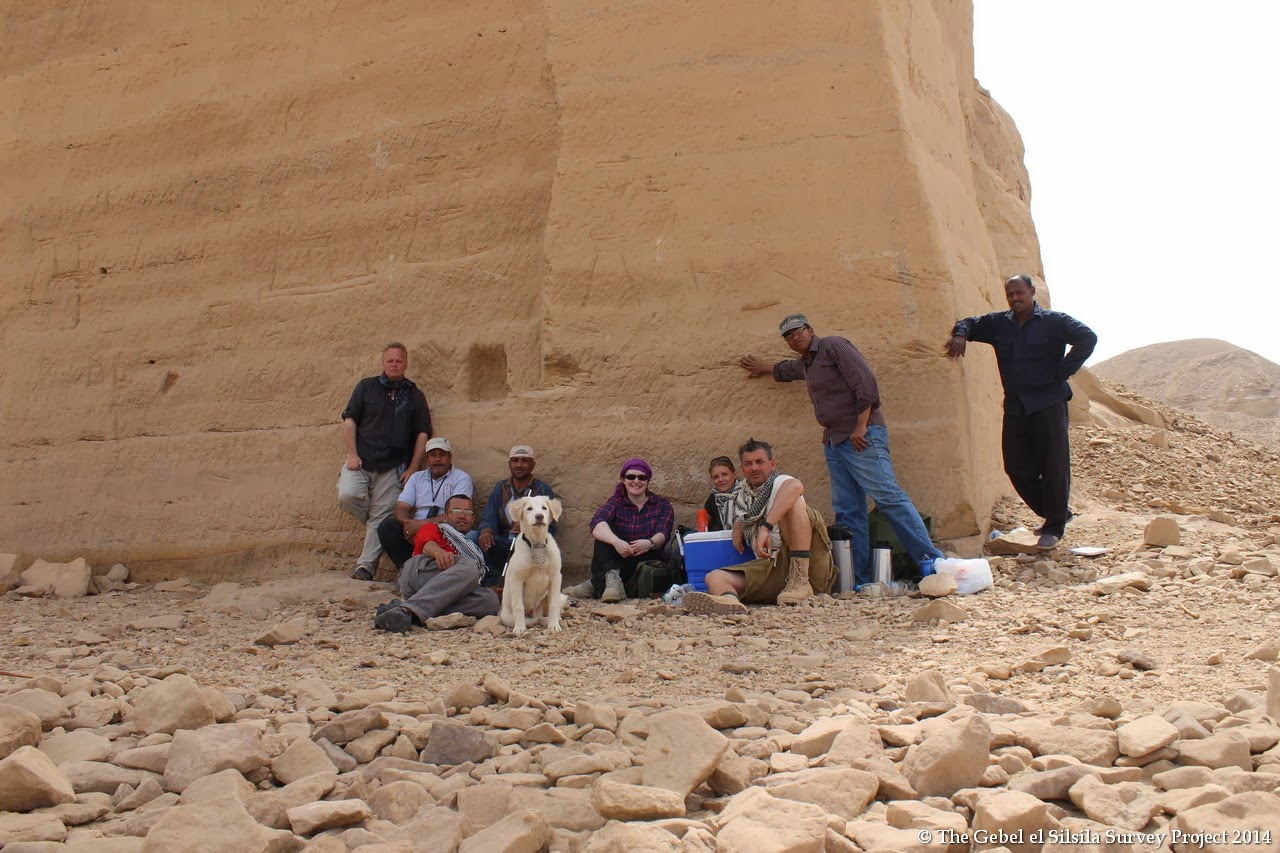 Lunch in the Pylon Quarry (Q24) 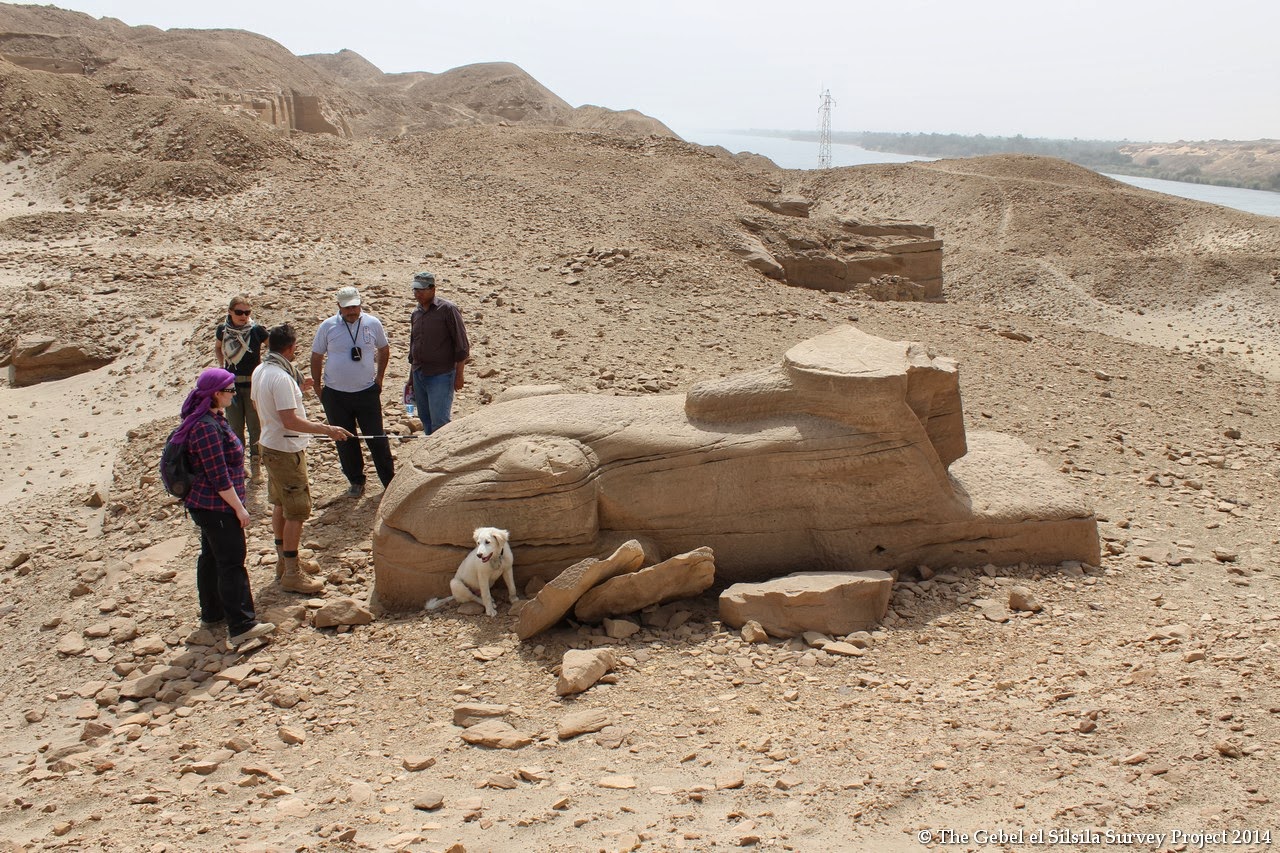 Introducing Mohammed and Sarah to the site 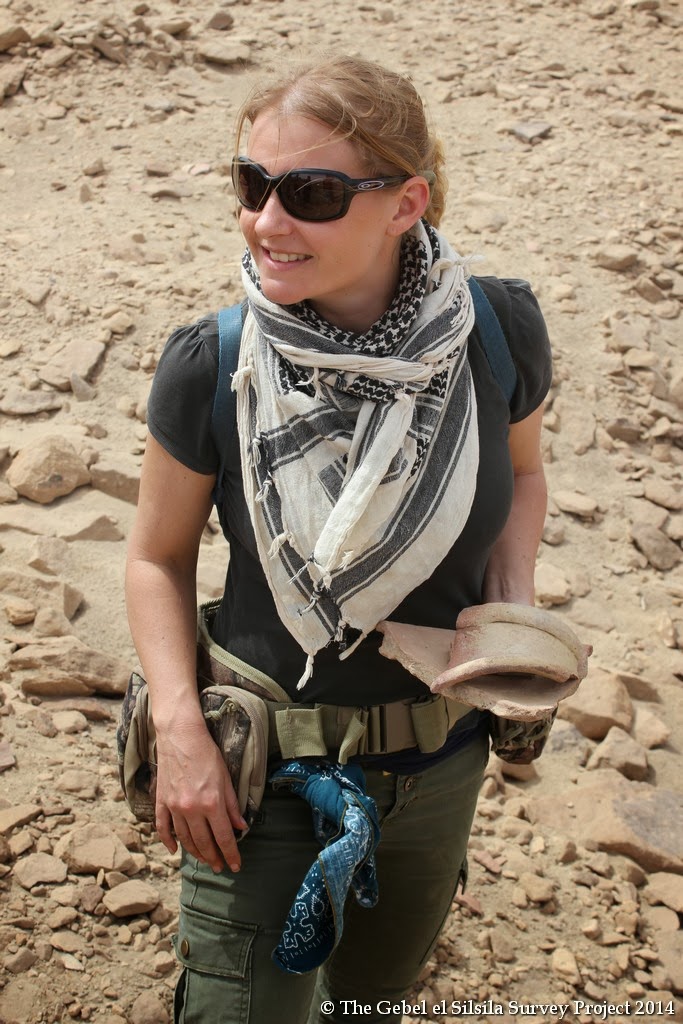 Pottery documentation
Our thanks go to Scotty Roberts for three days of great photo-work (and even greater Company!)